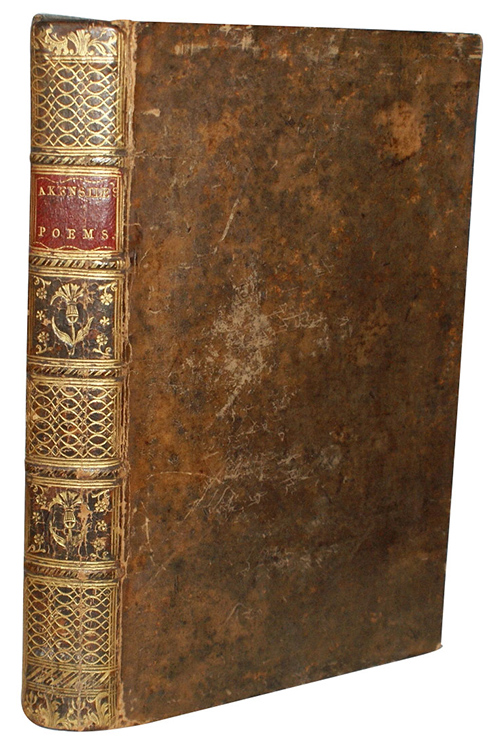 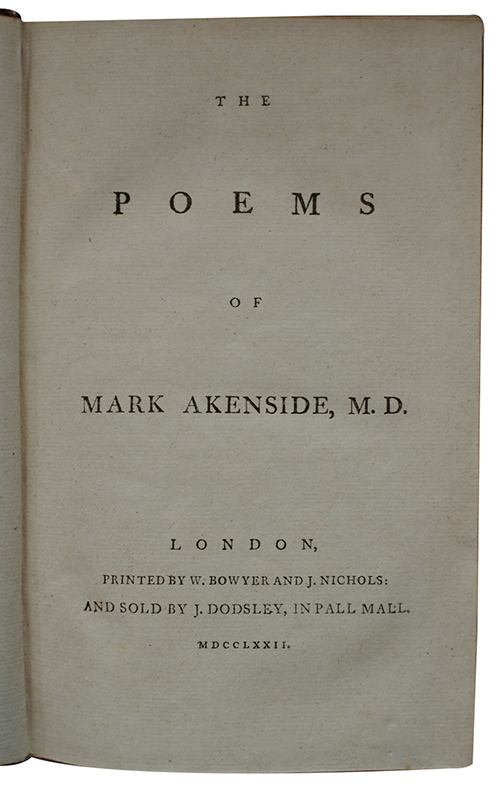 London. Printed by W. Bowyer and J. Nichols, 1772. First edition.
Call us Email us
8vo. xii, 402pp. Handsomely bound in contemporary calf, contrasting red morocco lettering-piece, richly gilt. Extremities rubbed. Internally clean and crisp. Armorial bookplate of E. H. Greenly to FEP.
The first collected edition of the work of English poet and physician, Mark Akenside (1721-1770), compiled following the author's demise by lifelong friend and heir Jeremiah Dyson 'either reprinted from the original editions, or faithfully published from copies which had been prepared by himself for publication.' Publisher's records show 1000 copies were printed. The collection includes two variants of the philosophical didactic poem The Pleasures of Imagination, considered to be the poet's finest composition, first published in 1744. The primary version is laid out 'as first published' in three books, whilst the second is on a 'somewhat different and an enlarged plan' and separates the final part into an unfinished 'Book the Third' and fragmentary 'Book the Fourth.' The volume also contains the Epistle to Curio (1744), a scathing satire of a political peer, and Odes on Several Subjects (1754), an innovative work in the neoclassical style. The poems of Akenside exerted considerable influence on contemporary writers and subsequently the Romantics, through both his development of the genre of poetic inscription and innovations in the grouping of related material into single collections.
ESTC T87425.
£ 150.00 Antiquates Ref: 13218
This site uses cookies.Find out more.