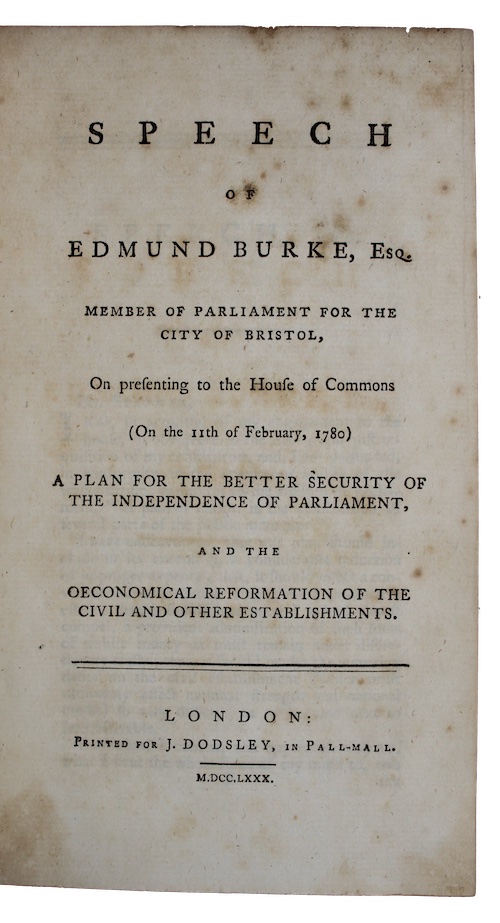 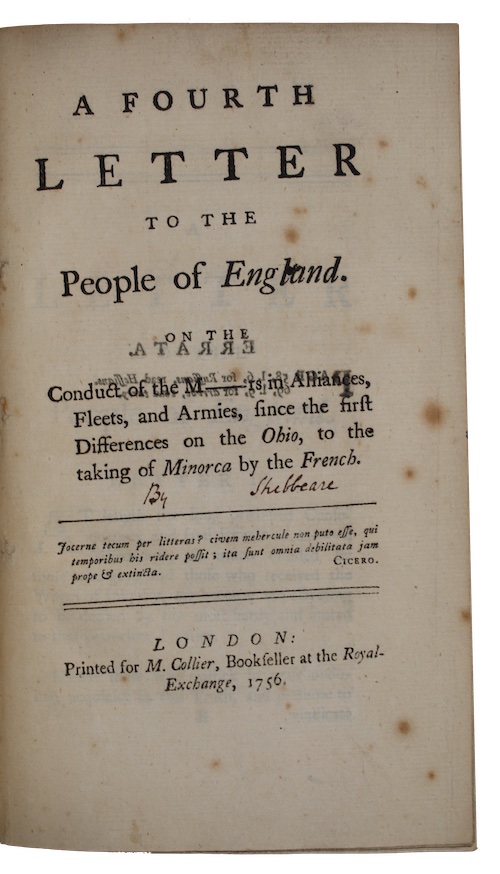 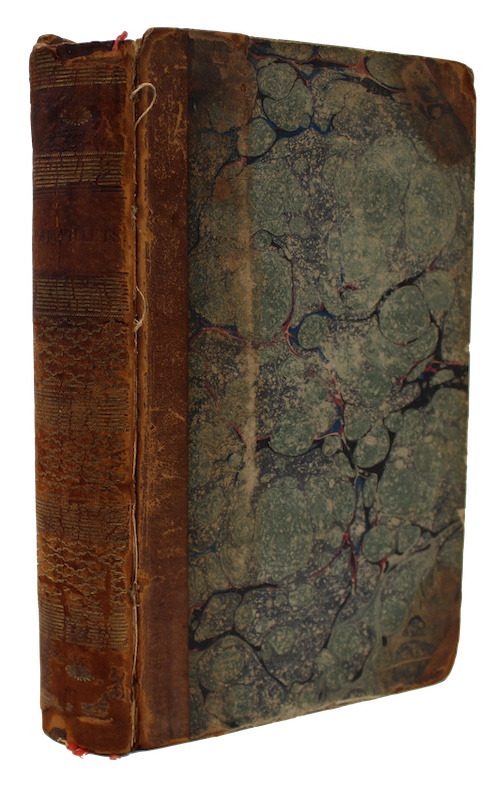 BURKE, Edmund. Speech of edmund burke, Esq. member of parliament for the city of bristol, On presenting to the House of Commons (On the 11th of February, 1780) a plan for the better security of the independence of parliament, and the oeconomical reformation of the civil and other establishments.

[Bound with:] [GEORGE IV]. Anticipation of the speeches intended to be spoken In the house of commons, On friday, May 4, upon the motion of alderman newnham, relative to the affairs of the prince of wales. London. Printed for J. Kearsley, 1787. New edition. [2], 110pp. With a half-title. Not in ESTC. cf. ESTC T18578.

[And:] [DE LOLME, Jean Louis]. The present national embarrassment considered; containing a sketch of the political situation of the heir apparent, and of the legal claims of the parliament Now assembled at Westminster: A Precedent being moreover introduced, borrowed from the English History, more truly applicable to the king's present Situation than any that has been hitherto adduced. London. Sold by T. Hookman et al., 1789. First edition. [2], 68pp, [2]. With an errata leaf. ESTC T11098.

8vo. Contemporary gilt-tooled half-calf, marbled boards. Extremities worn, joints split, boards held by cords only, without lettering-piece. Later inked gift inscription to FEP, manuscript list of contents to verso of FFEP, loss to lower corner of leaf D4 of final bound work, scattered foxing.
A coherent sammelband of five late-eighteenth century political pamphlets, including two by John Shebbeare (1709-1788). The development of war between Britain and France in 1755 inspired Shebbeare to compose a series of pamphlets criticising then prime minister, the Duke of Newcastle, and his government’s management of the ensuing conflict. Shebbeare condemned the ministry for sacrificing British maritime and colonial interests in North America by consistently indulging the Hanoverian leanings of George II. This theme continued through later Letters, with Shebbeare accusing the Whigs, in an increasingly scathing tone, of facilitating and supporting the continental wars of William III and George II in order to obtain increased political power, whilst further blaming the Newcastle administration for its poor European diplomacy and handling of the American war. The Fourth Letter sparked great controversy in placing responsibility with the ministry for French encroachments into British held territory - notably their defeat of Admiral John Byng and subsequent capture of the island of Minorca and their continued advance on the Ohio. Shebbeare supports his arguments with reports on the movements of Braddock and George Washington, and the high price of hiring Hessian mercenaries for combat.
£ 200.00 Antiquates Ref: 14108
This site uses cookies.Find out more.