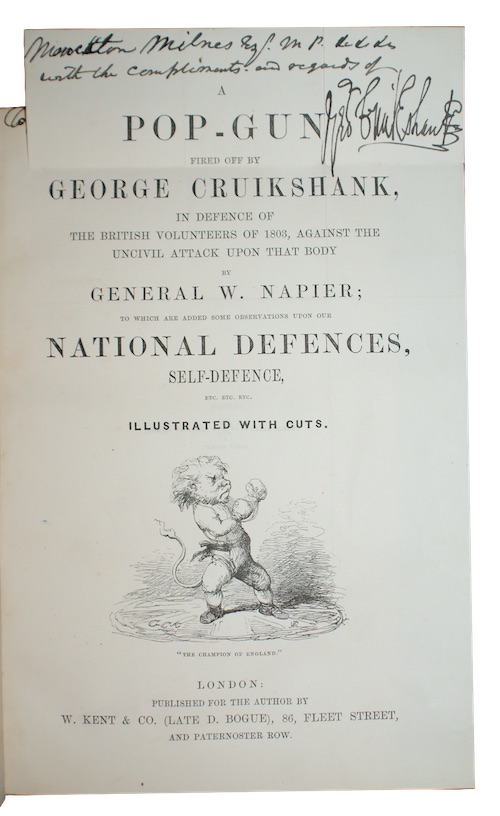 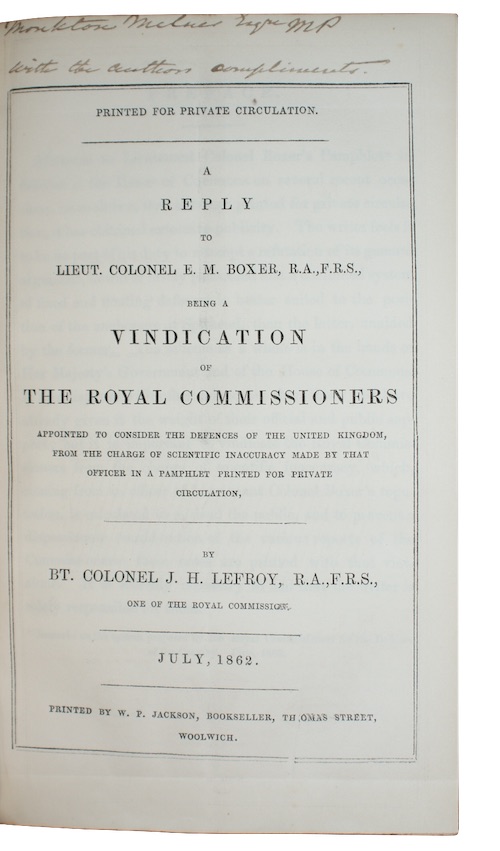 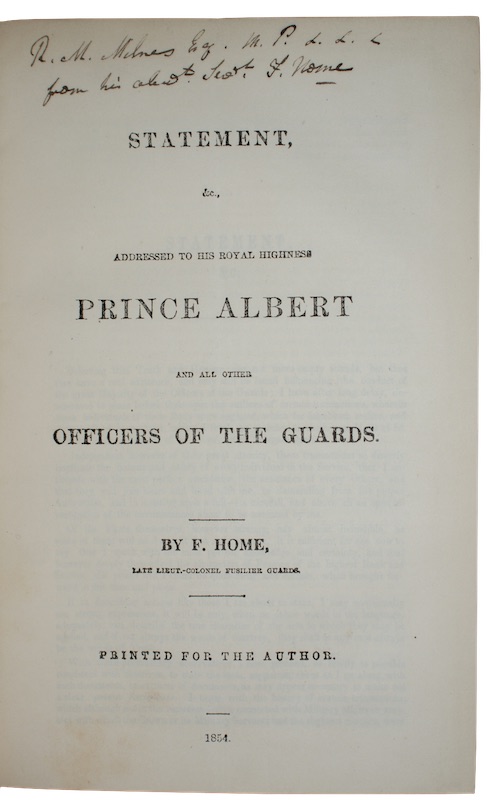 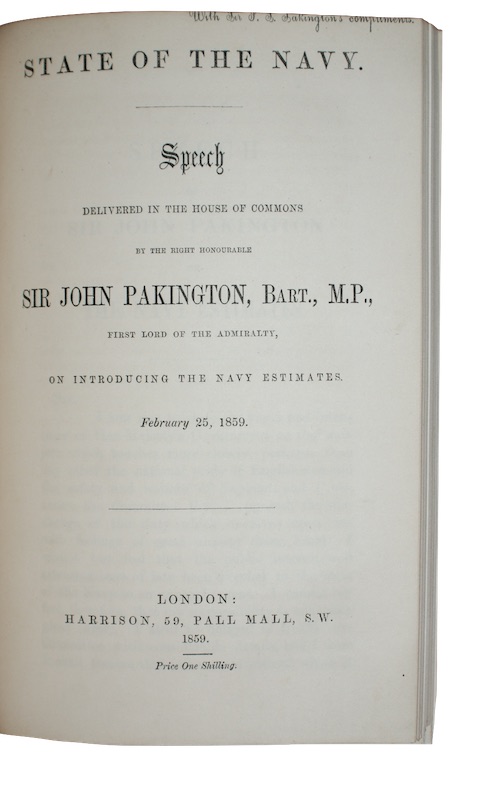 CRUIKSHANK, George. A pop-gun fired off by george cruikshank, in defence of the british volunteers of 1803, against the uncivil attack upon that body by general w. napier; to which are added some observations upon our national defences, self-defence, etc. etc. etc.

[Bound with:] PETO, Sir S. Morton. Observations on the report of the defence commissioners, with an analysis of the evidence. London. W. Mitchell, [s.d., c.1862]. First edition. 96pp. With half-title.

[And:] LEFROY, J[ohn] H[enry]. A reply to lieut. colonel e. m. boxer, r.a., f.r.s., being a vindication of the royal commissioners appointed to consider the defences of the united kingdom... Woolwich. Printed by W. P. Jackson, [1862]. 32pp. With an engraved frontispiece and an engraved folding plate. Presentation copy, inscribed to head of title-page; 'Monckton Milnes Esq. M.P. / with the authors compliments.'

[And:] Country rifle corp. Address from a committee of yeomen residing in the neighbourhood of exeter. Exeter. William Roberts, 1859. First edition. 12pp.

[And:] On the necessity of a general arming in england, by a permanent system of organisation, analogous to that of the anglo-saxon period, when every able man was a soldier for home defence, with remarks on the militia. London. T. and W. Boone, 1859. First edition. vi, [1], 8-51pp, [1].

[And:] A JOURNEYMAN SHOEMAKER [i.e. SMITH, Alphin]. The defences of england. Nine letters. Eight letters before the affair of the "trent." One letter afterwards. London. Robert Hardwicke, 1862. First edition. 22pp.

[And:] J. W. C. The militia as an army of reserve. London. Thomas Hatchard, 1856. First edition. 16pp. Presentation copy, inscribed to head of title-page; ' From the author'.

[And:] PLAYFAIR, A. W. A letter from a volunteer of 1806 to the volunteers of 1860, with suggestions of the defence of england, her weakness and her strength. Montreal. Printed by John Lovell, 1860. First edition. 30pp.

[And:] MONITOR. The increase of national defence and reduction of taxes. London. Effingham Wilson, [1862]. 32pp.

[And:] GARDINER, Robert, General Sir. Is england a military nation or not? A consideration respectfully addressed to the members of the house of commons. London. Byfield, Hawksworth, & Co., 1857. First edition. 31pp, [1].

[And:] GARDINER, Robert, General Sir. Comments on the question of legislative military responsibility: respectfully addressed to the honourable the members of the house of commons. London. Byfield, Hawksworth, & Co., 1858. First edition. 34pp.

[And:] GARDINER, Robert, General Sir. The position of the royal artillery of the british army, considered comparatively with that of the other arms of the service... London. Byfield, Hawksworth, and Co., 1858. First edition. 70pp.

[And:] GARDINER, Robert, General Sir. Categorical minute on the motion of the house of commons, for enquiry into the effects of the military changes in the ordnance department... London. Byfield, Hawksworth, & Co., 1859. First edition. 121pp, [1].

8vo. Two volumes bound in contemporary red half-morocco, brown buckram boards, gilt. Extremities rubbed. Armorial bookplates of Roberti Comitis de Crewe to both FEPs, occasional light creasing/spotting/dust-soiling, overall internally clean and crisp.
Two substantial sammelbands of scarce nineteenth-century works, the first a coherent collection of tracts on national defence, the second a gathering of pamphlets on military organisation and education. Of note is the inclusion of a presentation copy of the first edition of British artist George Cruikshank's (1792-1878) defence of, and involvement in, the civilian volunteer troop raised in 1803 against the threat of French invasion; aged just 11 at the time Cruikshank would drill with improvised toy weapons - training which he argued well-prepared him bearing arms as an adult in the 48th Middlesex corps.

A further highlight, also a presentation copy, is the transcript of politician Sir John Somerset Pakington's (1799-1880) parliamentary speech on the contemporary state of the Royal Navy's financial maintenance and expenditure, having had been elected First Lord of the Admiralty in 1858.

The second volume is dominated by tracts written by Sir Richard Gardiner (1781-1864). A well-respected officer of the British Army, Gardiner served during the Peninsular Wars, latterly becoming governor and commander-in-chief of Gibraltar and devoting himself to the improvement of Britain's defences, especially in regards to artillery reforms - publishing 12 pamphlets between 1848 and 1860.

The volumes were once in the possession of politician and onetime secretary of state to India Robert Offley Ashburton Crewe-Milnes, marquess of Crewe, formerly Lord Houghton (1858-1945) - to whose father Richard Monckton Milnes, first Baron Houghton (1809-1885) the presentation copies are inscribed.
£ 2,500.00 Antiquates Ref: 17249
This site uses cookies.Find out more.