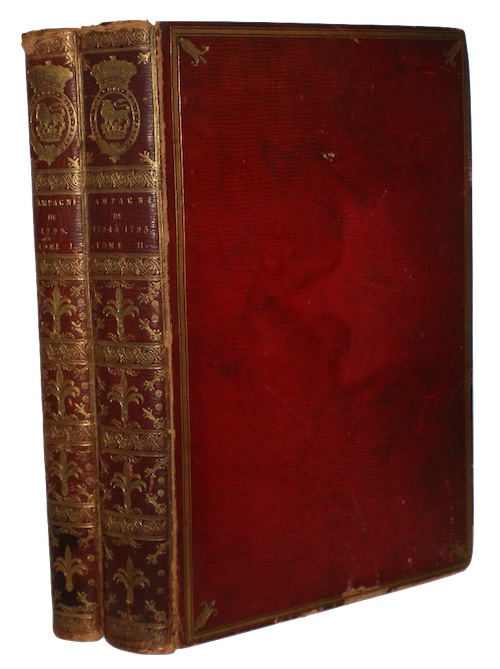 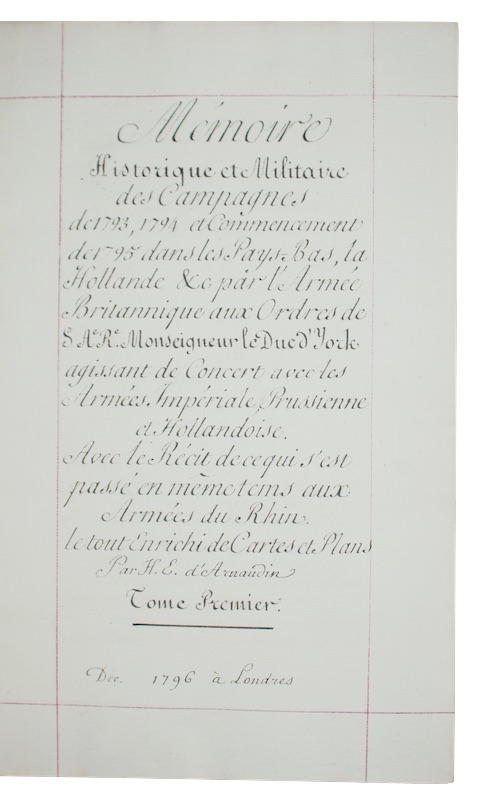 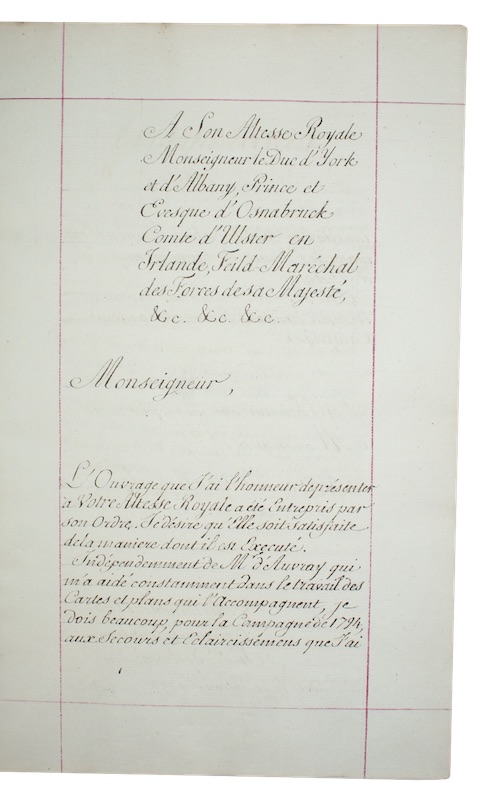 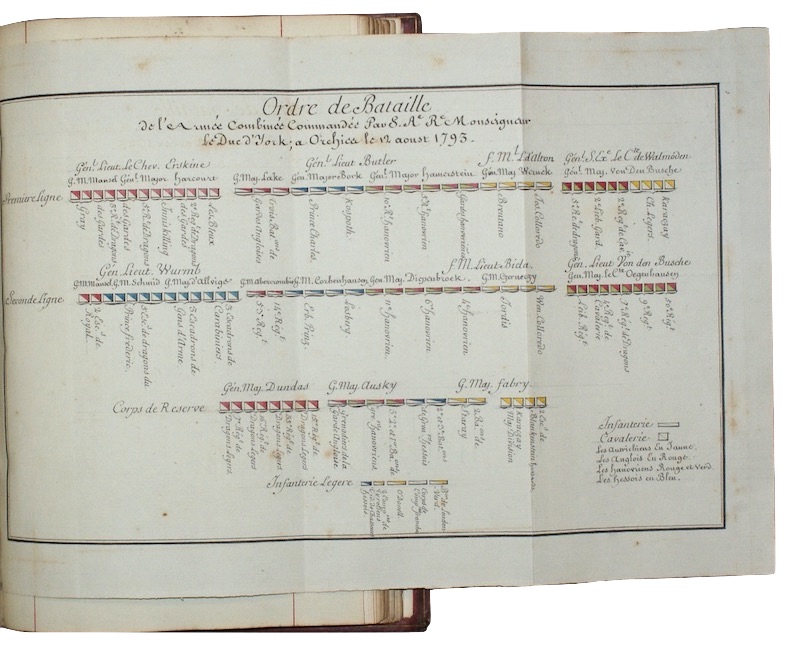 MANUSCRIPT HISTORY OF THE DUKE OF YORK’S FLANDERS CAMPAIGN

[s.i.]. Dec. 1796 a Londres
Call us Email us
Manuscript on paper. Two volumes. [2], 192, 191*-192*, 193-264, [4]; [6], 114, 111*-114*, 115- 198, 195*-198*, 199-274, 273*-274*, 275-409pp, [3]. With three illustrated orders of battle/charts. Contemporary red straight-grained, richly gilt-tooled morocco, bound for the dedicatee, the Duke of York, with his armorial to head of spine. Rubbed, with some loss/tearing to spines, joints, some marking. A.E.G., marbled endpapers. Upper hinge of volume I split.
An unpublished manuscript account of the Flanders Campaign, the first major English land engagement during the French Revolutionary Wars, from the library of the commander of the British forces, King George III's second son, Prince Frederick, Duke of York and Albany (1763-1827). Known in only three copies (the other two located at the British War Office library and in the French Army archives), this work by Colonel Arnaudin forms an exhaustive history of the disastrous allied campaign against Revolutionary France which resulted in the fall of the Austrian Netherlands, the Dutch Republic and the loss of some twenty-thousand men under the Duke of York’s command.

Exquisitely presented in the form of a significant printed work, with a dedication, introduction, chapters, sub-headings, indices and attractive diagrams of orders of battle, it was nevertheless clearly produced in the manuscript tradition. Regular numbered notes to the foot of gatherings of leaves ('Tome Premier Campagne de 1793 – 1, 2, 3' etc) suggest that it was presented unbound; and occasional corrections have been made over neat deletion. This copy bears a lengthy dedication to the Duke from 'Letres huble et tres Obeissant serviteur H.E. d'Arnaudin', inscribed 'a Londres le 20 Janviet 1797'. Little is known of the author but from this, his own unpublished memoir of the campaign; however references in early histories, such as that of John James M'Gregor (Waterford, 1816-21) suggest he was a well-connected e?migre? Colonel attached to the Austrian forces, and later part of the etat-major of the Duke of York.

Although bearing no evidence of provenance other than the arms stamped to the head of the spine, this was recently acquired by us with other volumes from the library of Lt. General Sir Herbert Taylor (1775-1839), assistant secretary and aide-de-camp to the Duke of York between 1795 and 1798, and later Private Secretary to Kings George III, George IV and William IV. Taylor was one of the Duke’s two executors, and the latter’s will explicitly bequeathed to him 'all my letters and manuscripts (not being contracts, securities, or muniments of title); and I request him to preserve, destroy, and dispose of the same respectively, according to such directions as I may have given to him for that purpose.'
£ 9,500.00 Antiquates Ref: 17774
This site uses cookies.Find out more.