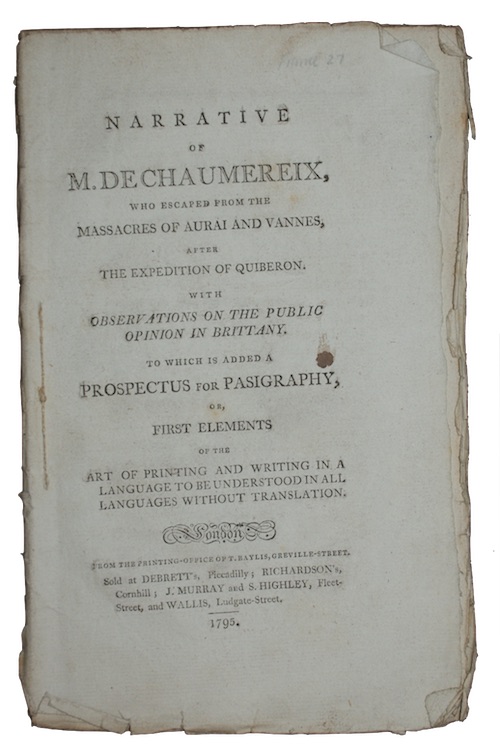 WITH A PROSPECTUS FOR A NEW UNIVERSAL LANGUAGE

CHAUMEREIX, Jean-Hugues Duroy de. Narrative of m. de chaumereix, who escaped from the massacres of aurai and vannes, after the expedition of quiberon, with observations on the public opinion in brittany. To which is added a prospectus for pasigraphy, or, first elements of the art of printing and writing in a language to be understood in all language without translation.

London. From the printing-office of T. Baylis, 1795. First edition.
Call us Email us
8vo. [2], 46, 4pp. Stitched, as issued. Very occasional light spotting.
An unusual work by Jean-Hugues Duroy Chaumereix (1763-1841), both an affecting account his experiences in the 1795 massacres at Auray and Vannes which saw the execution of overly Royalist sympathetic Chouans and emigres captured following the Battle of Quiberon; and a description of his concept for a new universal language. This pasigraphy, combining elements of tachygraphy and stenography, is designed, the author claims, to be learnt by 'any intelligent person' of any nation in just a few hours. The scheme was sanctioned by Roch-Ambroise Cucurron Sicard (1742-1822), director of the celebrated school for the deaf at Paris.