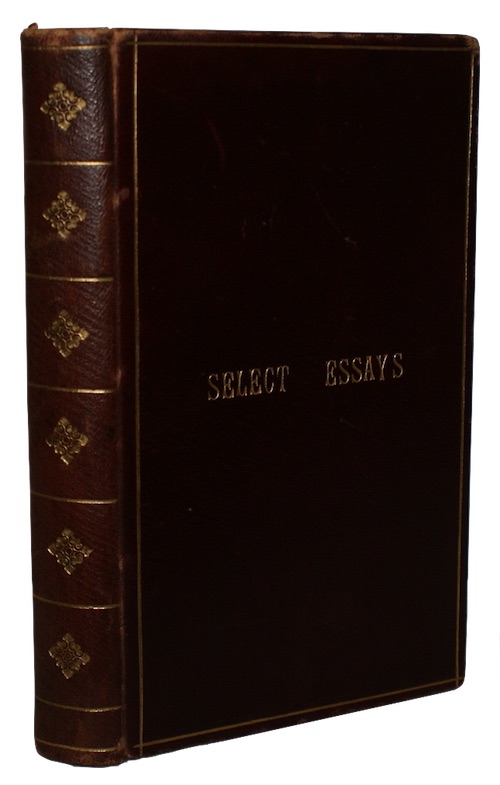 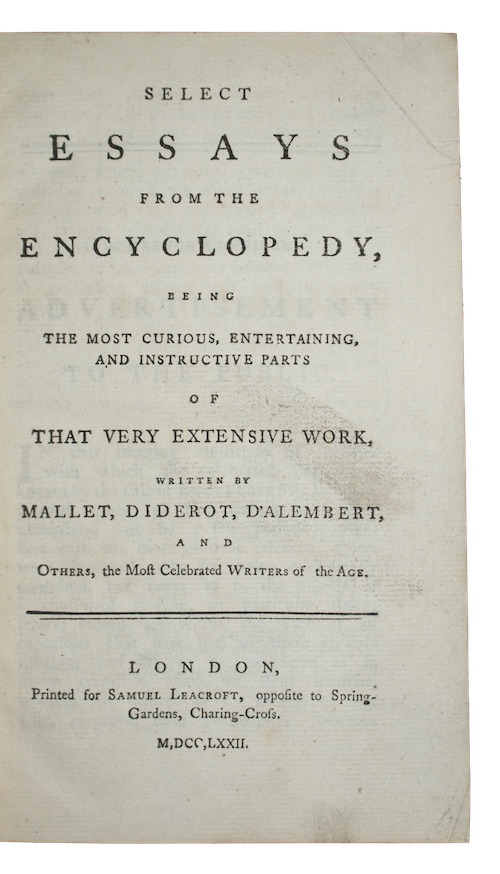 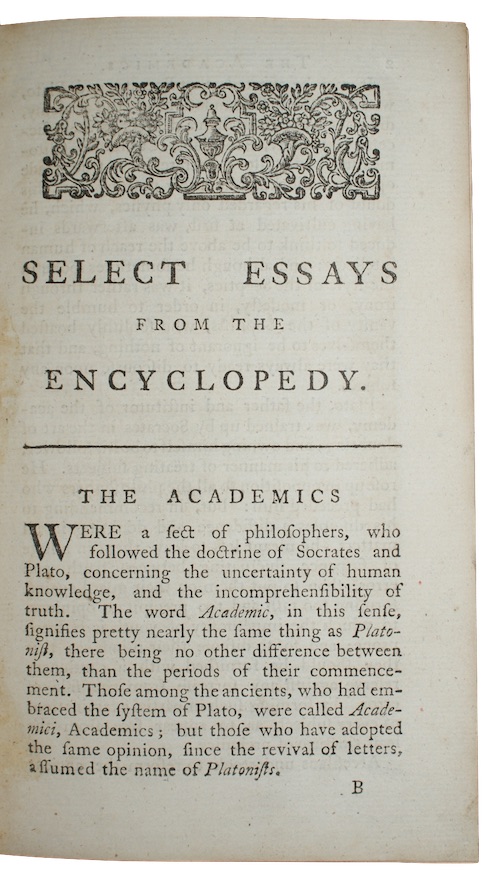 DIDEROT, Denis. D'ALEMBERT, Denis. Select essays from the encyclopedy, being the most curious, entertaining, and instructive parts of that very extensive work, written by Mallet, Diderot, D'Alembert, and Others, the Most Celebrated Writers of the Age.

London. Printed for Samuel Leacroft, 1772. First edition.
Call us Email us
8vo. [4], iv, [2], 372pp. With half-title. Nineteenth-century maroon roan, gilt, titled to upper board. Marbled endpapers, with the later book-label of 'Iain J.A.S. Woolley' to FEP, pencilled inscription of the same owner to blank fly-leaf. Slightly rubbed, a little chipped to joints at head of spine. Marginal paper flaw to F1.
Barring the abortive attempt to translate the entire French L'Encyclopedie into English, only the first fragment of which appeared as The plan of the French Encyclopaedia (London, 1752), this is the first significant appearance in English of the ground-breaking reference work of the enlightenment.

Appearing in the same year as the final folio of the French edition, it was apparently little noticed on publication. Only The London magazine appears to have provided a contemporary review, and it was far from complimentary: 'A collection of letters on various subjects by some of the most eminent literati that have lately appeared in France....the translation is lame, the spirit and elegance of the original is totally evaporated'.

Included in this selection are seven essays ascribed to Mallet, three to D'Alembert (including 'Des Cartes' Philosophy'), two to Diderot (including 'Cards'), 'Conjugal Infidelity' by Toussaint and a further nine pieces (as varied as the 64pp 'On Libraries', 'On the Canadians' and 'Ante-Diluvian Philosophy') either unsigned or indicated as collaborations.

Although institutionally relatively well catered for (with a few notable exceptions), this book is nonetheless uncommon in commerce, with no copies recorded in auction records of the recent decades.
ESTC T111521.
£ 750.00 Antiquates Ref: 18295
This site uses cookies.Find out more.