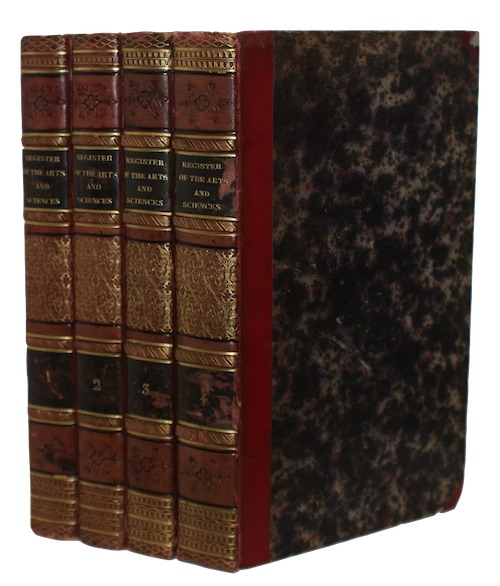 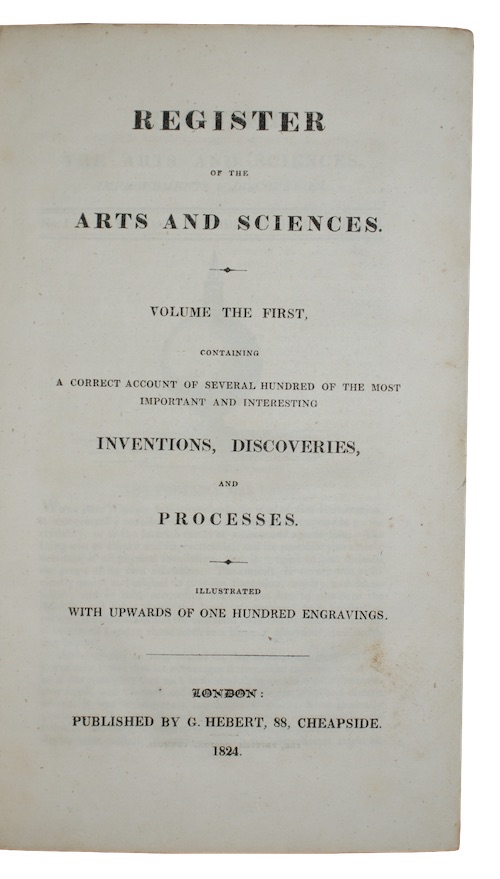 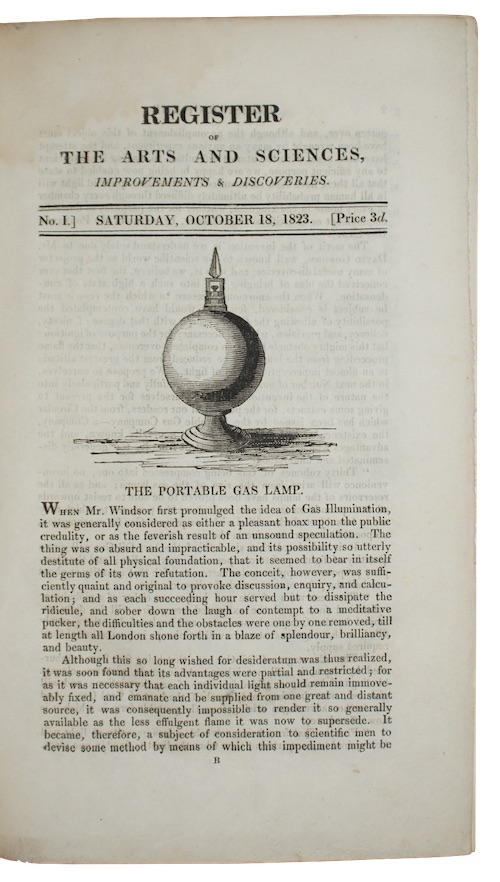 [REGISTER OF ARTS AND SCIENCES]. Register of the arts and sciences...A correct account of several hundred of the most important and interesting inventions, discoveries, and processes.

London. Published by G. Herbert, 1824-27 First edition.
Call us Email us
8vo. In four volumes, comprising numbers 1-104. [2], 372, ii, 6, 373-374; [2], 376, [1], 4-8; [2], 384, [1], 4-9, [1]; viii, 504pp. With an engraved frontispiece to Vol. III, an numerous engraved illustrations in the text. Contemporary gilt-tooled red half-calf, marbled boards, contrasting black morocco lettering-pieces. Extremities rubbed and a trifle marked.Marbled endpapers, light damp-staining to gutter of first five gatherings of Vol. I, paper repair to lower corner of final leaf of Vol. III, loss to head of leaf GG3, Vol. IV, very occasional slight chipping to margins.
A complete first series run of this biweekly specialised periodical dedicated to the specifications of patented inventions. As with William Newton's contemporary London Journal of Arts and Sciences, the editorial scope of the Register combined technical descriptions of engineering innovations with histories and commentaries upon recent developments in practical scientific application fuelled by the unprecedented manufacturing feats of the Industrial Revolution, which in turn led to a remarkably healthy market for new machinery patents in the first decades of the nineteenth-century. Unsurprisingly, the overwhelming majority of patents discussed are related to the production of more efficient steam engines, with many individuals understandably seeking to capitalise on the still emergent technology and make their fortune; a notable inclusion being what is seemingly the first published description of Brunel's Patent Steam Engine 'now in operation at the tunnel works, at Rotherhithe.' In addition several attempts are made to improve upon railway infrastructure, both in terms of rails and rolling stock, equally invaluable to the progress of the age.
£ 950.00 Antiquates Ref: 18796
This site uses cookies.Find out more.