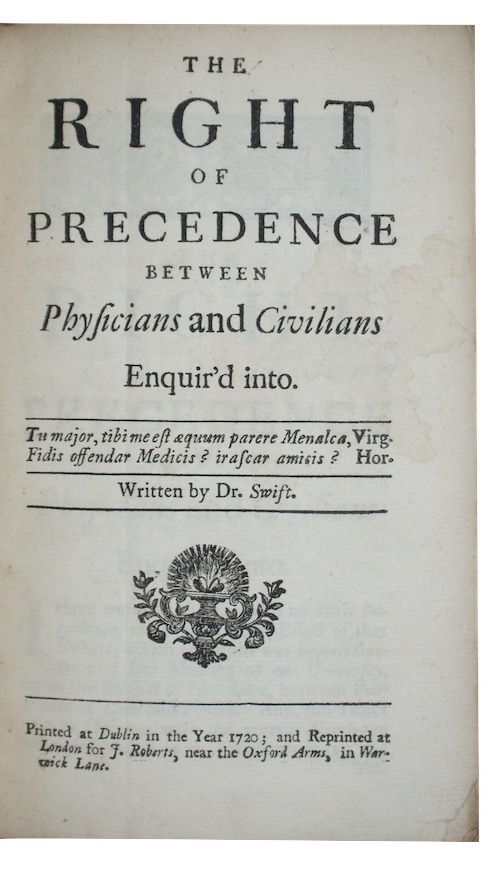 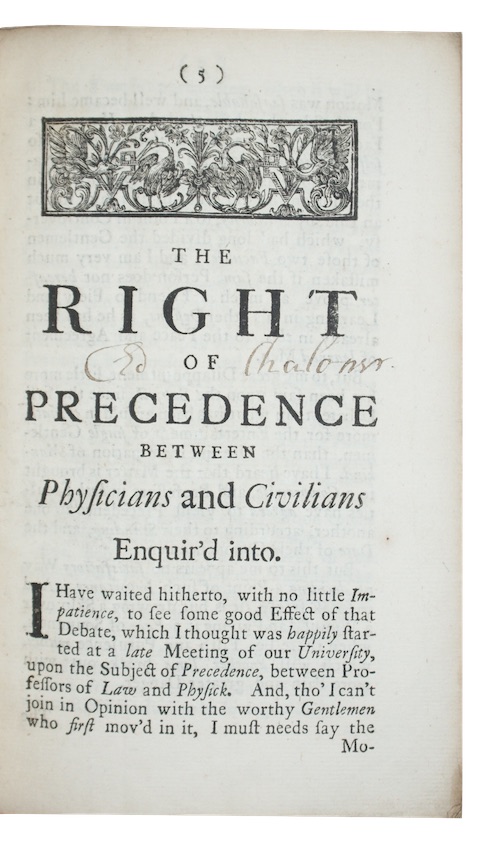 SWIFT, [Jonathan]. The right of precedence between Physicians and Civilians Enquir'd into.

[London]. Printed at Dublin in the Year 1720; and Reprinted at London for J. Roberts, [1720?]. Second edition.
Call us Email us
8vo. 32pp. With a half-title. Recent calf-backed marbled boards, lettered in gilt. Slightest of rubbing to extremities. Near contemporary inked ownership inscription of Isaac Atkinson to head of half-title, contemporary inked ownership inscription of Ed. Chaloner to first page of text, leaves lightly browned, occasional spotting, chipping to margins of final leaf.
A reissue, seemingly printed in the same year as the first edition, with a slight variation in title, of this satirical essay on law and medicine claiming to be the work of Anglo-Irish author Jonathan Swift (1667-1745), though this is likely a misattribution. The author, if not Swift then certainly a competent imitator, humorously suggests that physicians, given their knowledge of the workings of man both mental and physical, be appointed to all significant roles within the legal profession: '...for the universal Peace of Mankind, I make the following Rule...I decree, that a Doctor of Physick shall take Place of a Doctor of Laws; a Surgeon of an Advocate, an Apothecary of a Proctor of Office, and a Tooth-Drawer of a Register in the Court.' This edition was also issued as part of A second collection of miscellanies (London, 1720).
ESTC N25964.
£ 250.00 Antiquates Ref: 19209
This site uses cookies.Find out more.