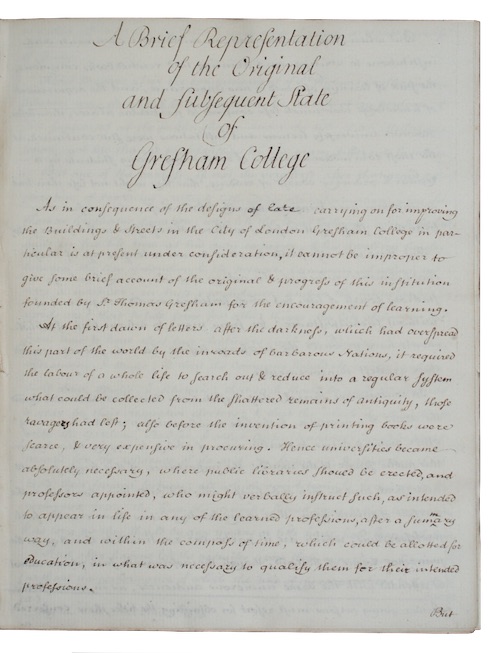 [GRESHAM COLLEGE]. A Brief Representation of the Original and Subsequent State of Gresham College.

[s.i.]. [s.n.], [s.d.]
Call us Email us
Quarto. Manuscript on paper. [21]pp. Disbound. Clean and crisp.
An original eighteenth-century manuscript on the early history of Gresham College, motivated 'in consequence of the designs of late carrying on for improving the Buildings & streets in the City of London.' Commencing with the founding of the institution in 1597 under the will of Sir Thomas Gresham (c.1518-1579), the author charts the progress of the college, highlighting notable architectural alterations and the contributions of influential lecturers including Christopher Wren (1632-1723) and Robert Hooke (1635-1703).

This item was apparently, according to auction records, formerly a part of a volume of pamphlets from the recently dispersed Rosebery Library (Lot 78, Sotheby's, 29th November 2009.)
£ 450.00 Antiquates Ref: 19223
This site uses cookies.Find out more.