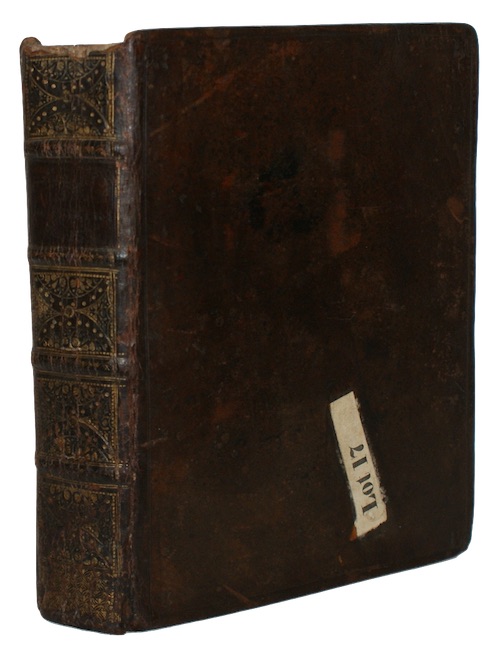 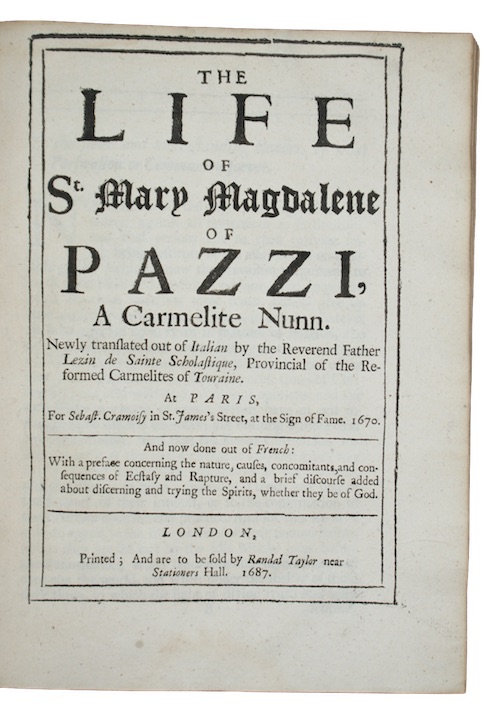 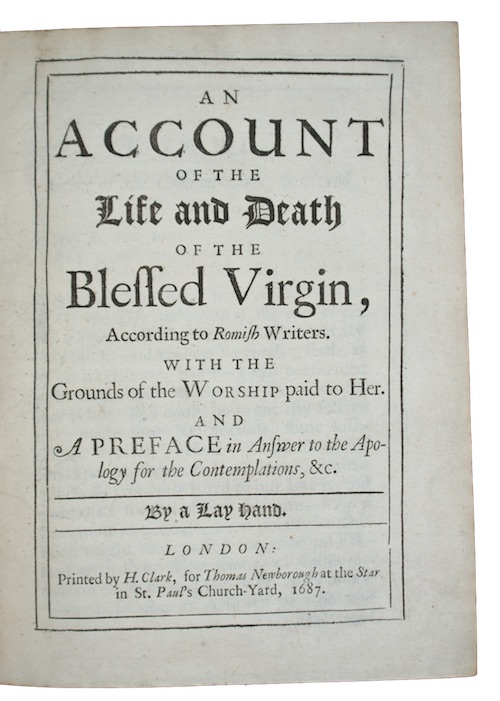 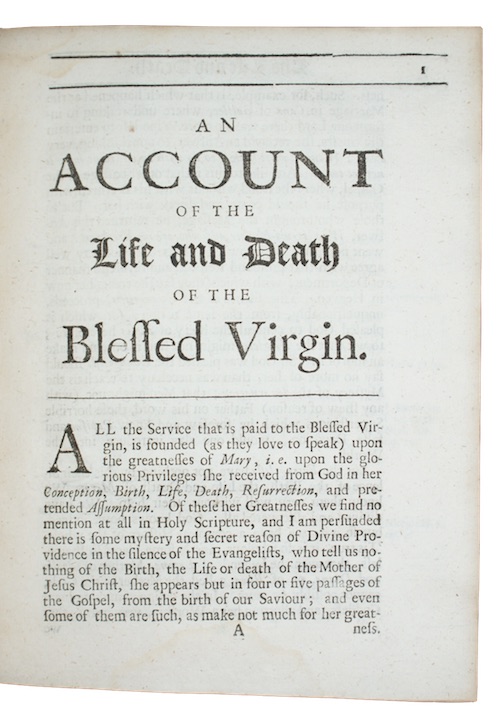 [FLEETWOOD, William]. An account of the Life and Death of the Blessed Virgin, According to Romish Writers. With the Grounds of the Worship paid to Her. And A preface in Answer to the Apology for the Contemplations, &c..

[And:] [BRIDOUL, Toussaint]. The school of the eucharist established Upon the Miraculous Respects and Acknowledgments, which Beasts, Birds, and Insects, upon several Occasions, have rendred to the Holy Sacrament of the Altar... London. Printed for Randall Taylor, 1687. First edition. [4], xxiv, [2], 45pp, [1]. With an initial imprimatur leaf. ESTC R9439, Wing B4495.

[And:] [GOTHER, John]. An agreement between the Church of England and Church of Rome, Evinced from the Concertation of some of Her Sons With their Brethren the dissenters. London. Printed by Henry Hills, 1687. First edition. [8], 88pp. ESTC R6770, Wing G1324.

[And:] [SHERLOCK, William]. A vindication of some Protestant Principles of Church-Unity and Catholick-Communion, From the Charge of Agreement with the church of rome... London. Printed for William Rogers, 1688. First edition. [8], 120, 127-128pp, [1]. Complete despite erratic pagination. With an initial imprimatur leaf and a terminal leaf of publisher's advertisements. ESTC R32140, Wing S3372.

[And:] [WILLIAMS, John]. The case of the Lay-Communion with the church of england considered; And the Lawfulness of it shew'd, from the Testimony of above and hundred eminent Non-conformists of several Perswasions. London. Printed for Richard Chiswell, 1684. Second edition. ESTC R226970, Wing W2692.

Quarto. Near contemporary calf, spine richly gilt. Without lettering-piece. Rubbed, slight splitting to joints, loss to head of spine, printed paper lot number pasted to upper board, corners bumped. Hinges reinforced, very occasional light damp-staining to foot, some spotting, overall internally clean and crisp.
A sammelband of nine Restoration titles, four of which concerning women notable to the Christian faith, including three devotional works dedicated to the sanctity of the Virgin Mary, and the first edition in English (translation by Thomas Smith) of Vincentio Puccini's La vita di Santa Maria Maddalena de' Pazzi (1609). An account of the deeds of Italian Carmelite nun and mystic Saint Mary Magdalene de' Pazzi (1566-1607), Puccini's work was written with the specific intention of developing her cult throughout Europe and enlivening the process of her canonisation. Born to one of the wealthiest and most distinguished families of Renaissance Florence, de' Pazzi was accepted as a novice at the Monastero di S. Maria degli Angeli at the age of seventeen; here she experienced numerous ecstasies and was said to be capable of divining the future, numerous miracles were attributed to her. The process of her beatification was begun in 1610 under Pope Paul V, and completed under Pope Urban VIII in the year 1626. She was canonized by Pope Clement IX in 1669.
£ 1,250.00 Antiquates Ref: 19622
This site uses cookies.Find out more.