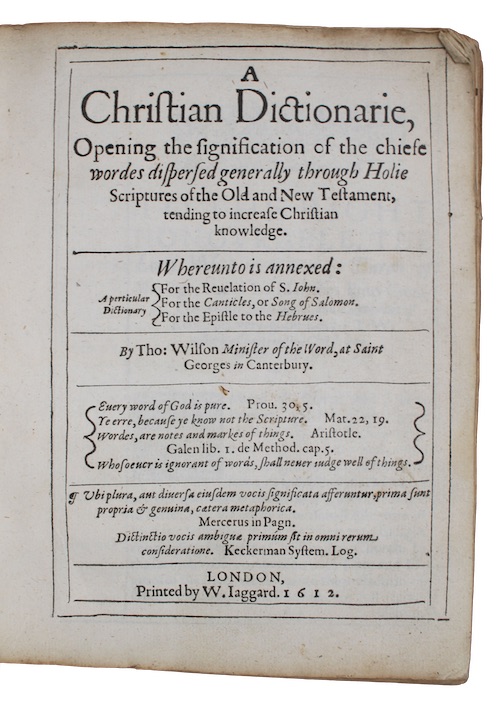 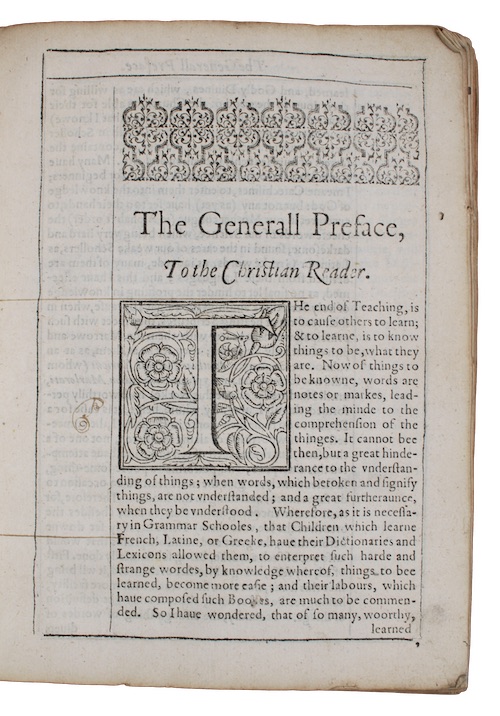 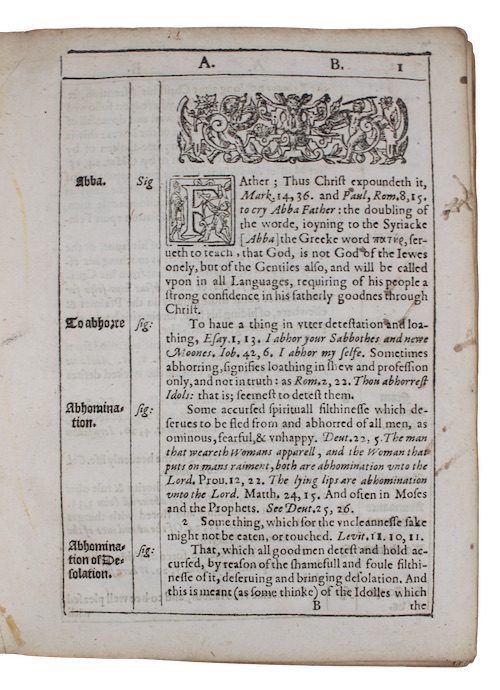 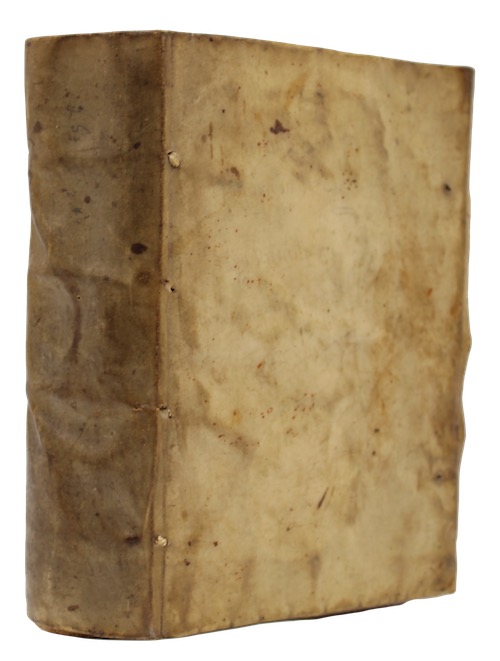 WILSON, Tho[mas]. A Christian Dictionarie, Opening the signification of the chiefe wordes dispersed generally through Holie Scriptures of the Old and New Testament, tending to increase Christian knowledge. Whereunto is annexed: A particular Dictionary For the Revelation of S. John. For the Canticles, or Song of Salomon. For the Epistle to the Hebrues.

London. Printed by W. Jaggard, 1612. First edition.
Call us Email us
Quarto. [32], 240, 243-577, [1], 234, [2]. With initial leaf A1 (blank but for signature), and terminal errata leaf. Contemporary limp vellum. Marked and rubbed, hinges straining but still attached. Small marginal wormtracks through quires A-E, slight marginal paper loss to fly-leaves and terminal errata leaf. Early inscription and pen trials by Walter Barton (including to the bottom edge of the text block, alongside an another relative, with the first initial T) to blank fly-leaf at front, early (priced) inscription of 'J. Warde. pd. 3s4d' to head of A1 and further early motto inscribed to verso of upper board. With the recent bookplate of Eric Gerald Stanley, late Rawlinson and Bosworth Professor of Anglo Saxon at Oxford, to verso of upper board.
The first edition of the first English biblical dictionary, and an early biblical concordance, by Thomas Wilson (1563-1622), Anglican clergyman. After matriculating from Queen's College, Oxford, in 1581, Wilson secured - with the assistance of Queen's Provost Henry Robinson - a position as rector of St George the Martyr, Canterbury, which he retained until his death. It was not until 1609 that any of Wilson's works, which included sermons, commentaries and practical guides to the scripture, were published, but it is for the Christian Dictionary, which proceeded through twelve (admittedly extended) editions by 1678, that he is remembered. Wilson became, during 1611, the chaplain to English diplomat and administrator Edward Wotton, Baron Wotton of Marley (1548-1626), brother of the poet Henry Wotton, and himself the literary benefactor who engaged Florio to translate Montaigne's Essais, was named in the first line of Sidney's Defense of poesie, and the recipient of a dedicatory sonnet in Chapman's translation of the Iliad.

The work, which includes attempts at definitions of many words (e.g. 'Desolate. Left alone, heavy and comfortlesse') and references to the word's use within the Bible, is divided into four parts, as the title explains. The first part, occupying the overwhelming bulk of the text, is a general reference work to words of Scripture, and is followed by three 'particular' dictionaries specific to Revelation, the Song of Solomon, and the Epistle to the Hebrews, the latter of which Wilson describes as being 'somewhat more darke than other the (sic) Writings of the New Testament'. In a dedication to Edward Wotton, the author thanks the literary sponsor for his own 'gracious favour to my meane selfe', connecting this important early lexicographical work - 'a generall Register of Sacred wordes, with their significations, scattered throughout the whole Bible' - to somewhat better known Elizabethan and Jacobean literary luminaries.