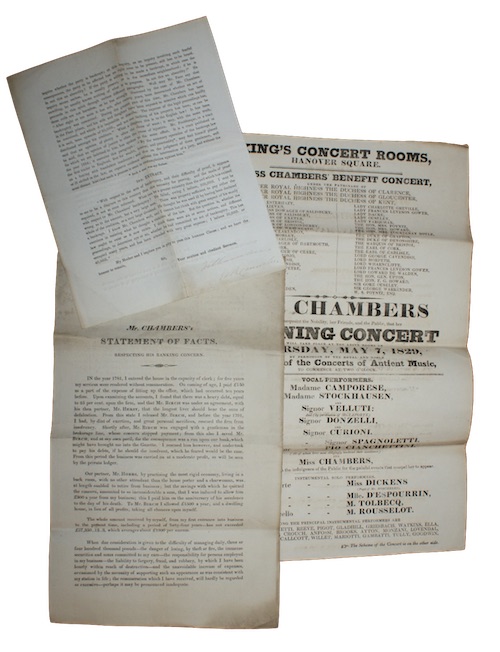 [CHAMBERS, Miss Mary Radcliff]. King's concert rooms, hanover square. Miss chambers' benefit concert...Miss chambers Begs to acquaint the Nobility, her Friends, and the Public, that her morning concert will take place at the above rooms on thursday, may 7, 1829.

[London]. Printed by Joseph Mallett, Wardour Street, [1829].
Call us Email us
Dimensions 382 x 240mm. Single leaf broadside, printed on both sides, with a 'scheme of Miss chambers' concert', in two acts, to verso. Slightly marked and chipped at edges, with horizontal folds.

[And:] [A printed letter regarding the introduction of a new clause to the Bankruptcy Bill into the House of Commons, to prevent imprisonment for debtors over 70]. [s.i.]. [s.n., s.d.]. Dimensions 235 x 183mm. Single leaf broadside, printed on both sides. [2]pp. Lightly soiled, with vertical fold, signed in manuscript at foot. by both M.R. Chambers and her mother.
A rare survival of a group of three printed items group relating to the late Regency-era performer Miss Mary Radcliff Chambers, who was commonly referred to as 'The Banker's Daughter', the financial distress of Abraham Henry Chamber after the failure of his bank, Chambers and Sons, during the Fauntleroy Panic of 1824, and attempts to modify bankruptcy law to provide mercy to those over 70.

Left as the sole provider for her family, the first broadside shows how young Miss Chambers turned to opera, with her once associates (including Queen Adelaide, the Princess Augusta and the Duchesses of Kent and Gloucester) becoming obliging patronesses, supporting concerts in her benefit in London and the provinces. At the same time, as the second and third items attest, the Chambers family continued to work towards reforming the injustices of English bankruptcy law during the middle of the nineteenth-century.
£ 350.00 Antiquates Ref: 20437
This site uses cookies.Find out more.