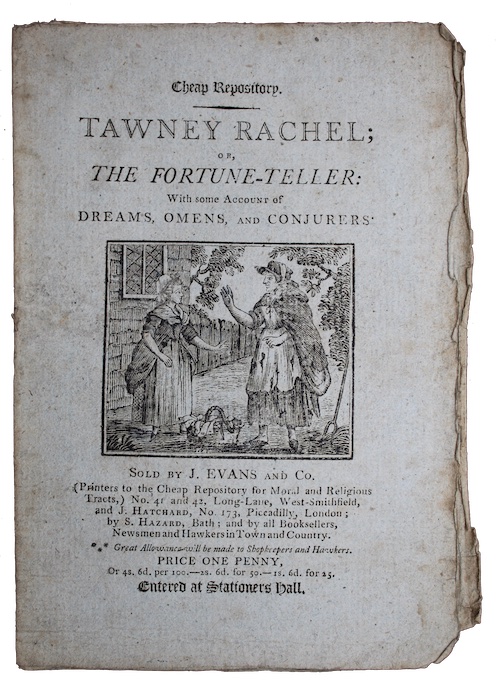 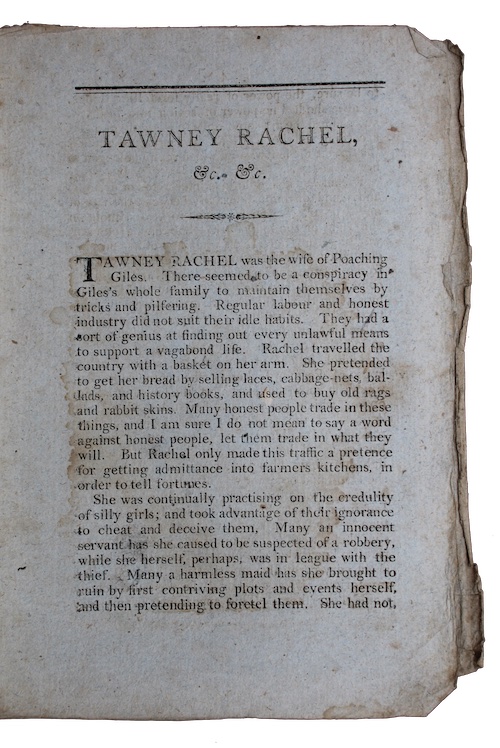 [MORE, Hannah]. Cheap Repository. Tawney rachel; or, the fortune-teller: With some Account if dreams, omens, and conjurers.

London. Sold by Evans and Co....J. Hatchard...S. Hazard...and by all Booksellers, Newsmen and Hawkers in Town and Country, [s.d., 1797-1801?]
Call us Email us
8vo. 16pp. Woodcut vignette to title page. Uncut. Stitched, as issued. Lightly browned.
One of the darker titles in Hannah More's (1745-1833) Cheap Repository Tract series; the eponymous Tawney Rachel travels across England as a fortune teller 'continually practising on the credulity of silly girls' and taking advantage of their ignorance 'to cheat and deceive them', relieving them of their money, and, in one instance a valuable silver sup. Her crimes are eventually discovered, and as punishment she is transported to Botany Bay, presumably for life.

Priced at half a penny and intended to be distributed as an antidote to the immoral popular literature circulating in ballad and chapbook form in the late eighteenth-century, the Cheap Repository series aimed to combat unscrupulous living and secular dissent. The present work was perhaps a response to the rising popularity of almanacs and dream books aimed at a female readership and attributed to female authority figures such as Mother Shipton. As More concludes her tale she leaves no ambiguity regarding her intentions: 'I have thought it my duty to print this little history, as a kind of warning to all young men and maidens not to have anything to say to cheats, impostors, cunning women, fortune-tellers, conjurers, and interpreters of dreams...to consult these false oracles is no only foolish, but sinful...Never believe that God conceals his will from a sober Christian who oberys his laws, and reveals it to a vagabond gipsey; who runs up and down breaking the laws, both of God and man'.
£ 450.00 Antiquates Ref: 20557
This site uses cookies.Find out more.