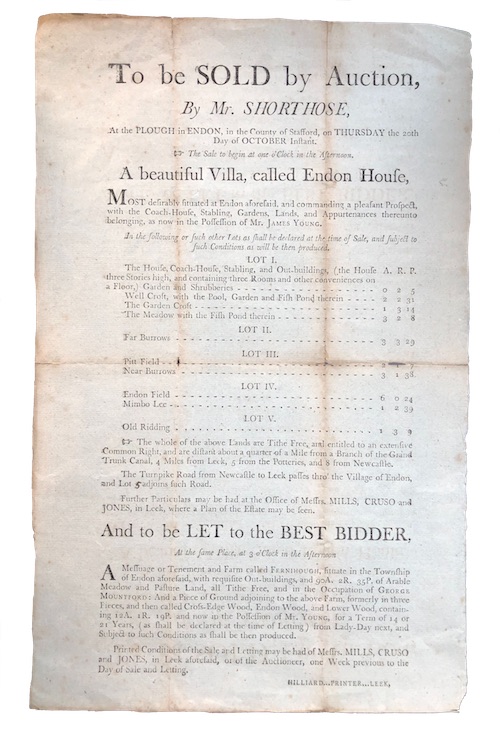 [STAFFORDSHIRE AUCTION]. To be sold by auction, By Mr. Shorthouse, At the plough in endon, in the County of Stafford, on Thursday the 20th Day of October.

Leek. Hilliard...Printer, [s.d., 1794?]
Call us Email us
Dimensions 430 x 270mm. Single leaf broadside. Folded, with old creasing, some browning, tears and slight loss at folds. A single manuscript correction in ink: 'The Turnpike Road from Newcastle to Leek passes thro' the Village of Endon, and Lot (3 corrected to) 5 adjoins such Road'.
An unrecorded eighteenth-century broadside which advertises the auction sale, at ‘the PLOUGH in Endon’, of the Staffordshire country residence at and land at Endon House - and the related leasehold of Fernihough ‘Tenement and Farm’. Noting that ‘Further Particulars may be had at the Office of Messrs. MILLS, CRUSO and JONES in Leek, where a Plan of the Estate may be seen’, however a further note suggests that the (anonymous) Auctioneer was not to be a representative of this firm.

Although undated, the identified previous owner of Endon House (James Young) died 1807, suggesting that the latest year the sale can have taken place (dating it from 20th October being a Thursday' was 1803. However, the broadside’s printer Francis Hilliard of Leek went bankrupt in 1794; this is only the third item to have emanated from his press that we could locate, the others being notice of a timber sale (ESTC T231552) and a the menu and bill of fare for the George Inn, Leek.
Not in ESTC.
£ 450.00 Antiquates Ref: 20595
This site uses cookies.Find out more.