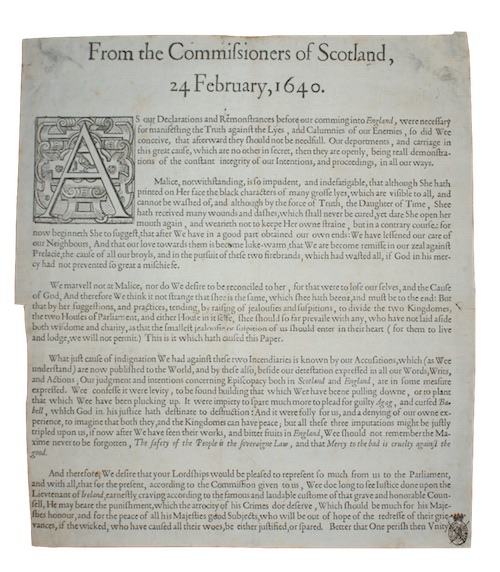 [s.i.]. [s.n.], [1641].
Call us Email us
Dimensions 250 x 290 mm. Single leaf broadside. Elaborate woodcut capital. One edge partially shaved without loss to text, two small paper repairs to verso, two minute worm-holes - just clipping text, cancelled ink-stamp of the Bibliotheca Lindesiana to foot.
A broadside concerning the unity of the kingdoms of England and Scotland, and calling for justice upon the Lord Lieutenant of Ireland, Thomas Wentworth, Earl of Strafford (1593-1641). Strafford had been elevated to the position of Lord Lieutenant in January 1640. He immediately set about raising an Irish army with the threat of reducing Scotland should the country resist in any way the will of Charles II. As the present broadside makes clear, the Scottish covenanters viewed Strafford as their most dangerous enemy. Their continued pressure in Parliament would contribute the Strafford's impeachments and execution in 1641.
ESTC R6419, Wing S1001D.
£ 450.00 Antiquates Ref: 21132
This site uses cookies.Find out more.