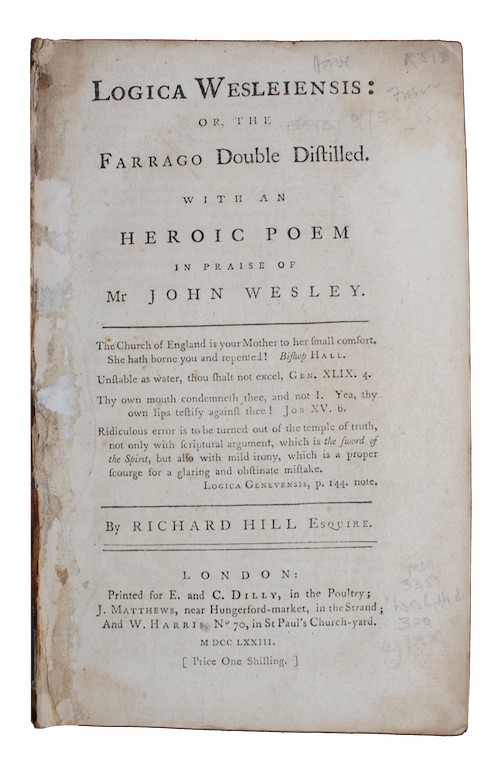 HILL, Richard. Logica Wesleiensis: or, the Farrago Double Distilled. With an heroic poem in praise of Mr john wesley.

London. Printed for E. and C. Dilly et al., 1773. First edition.
Call us Email us
8vo. 63pp, [1]. With an advertisement slip pasted on the verso of p.63. Disbound. Title page working loose, light damp-staining to lower corner, very occasional chipping/small holes to margins.
The sole edition of religious controversialist Richard Hill's (1733-1808) reproof of Methodist movement founder John Wesley’s (1703-1791) increasingly strident attacks on both himself and Calvinism. Hill had converted to evangelical Christianity in 1758, within the Methodist movement he aligned himself with Calvinism of Whitefield rather than the Arminian beliefs of Wesley. In 1772 he published the critical Review of all the Doctrines taught by the Rev. Mr. John Wesley. Wesley responded in kind, leading to a protracted pamphlet war. The 'heroic poem' (p.46-51) is predominantly composed of phrases extracted from Wesley's hymns and Remarks; the remainder comprises an exposition of the instances where Wesley contradicts himself over doctrine. Wesley published a reply, Some Remarks on Mr. Hill's Farrago double-distilled in 1773; the pair met the following year and resolved their differences.
ESTC T85443
£ 150.00 Antiquates Ref: 21253
This site uses cookies.Find out more.