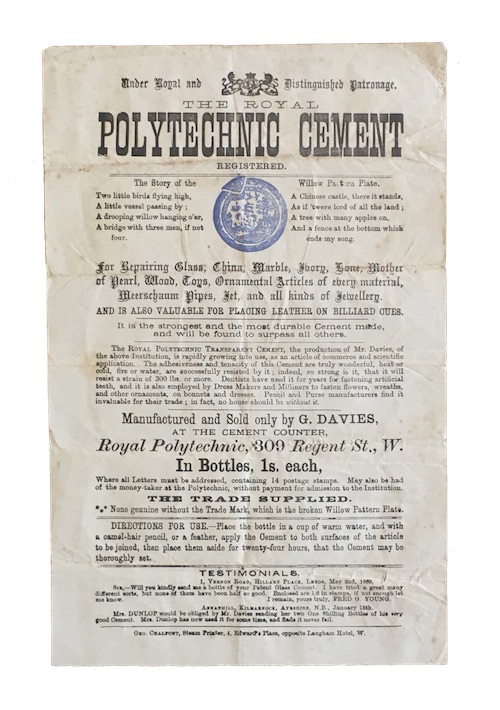 [London]. Geo. Chalfont, Steam Printer, [s.d., 1870s?]
Call us Email us
Dimensions 230 x 280 mm. Single leaf handbill, printed on one side only. Horizontal and vertical folds, lightly creased and spotted.
An apparently unrecorded advertisement for a transparent adhesive for repairing 'ornamental articles of every material', 'all kinds of jewellery', and rather specifically 'placing leather on billiard cues'. The Royal Polytechnic, where the product was sold, was founded 1837 as, according to their prospectus: 'an institution where the Public, at little expense, may acquire practical knowledge of the various arts and branches of science connected with manufacturers, mining operations and rural economy'. The Polytechnic formally received a Royal charter in August 1839. In 1881 the institution closed; it would reopen one year later under new ownership and with an altered name - indeed numerous changes of moniker were made in subsequent decades, today it operates as the University of Westminster.
£ 100.00 Antiquates Ref: 21289
This site uses cookies.Find out more.