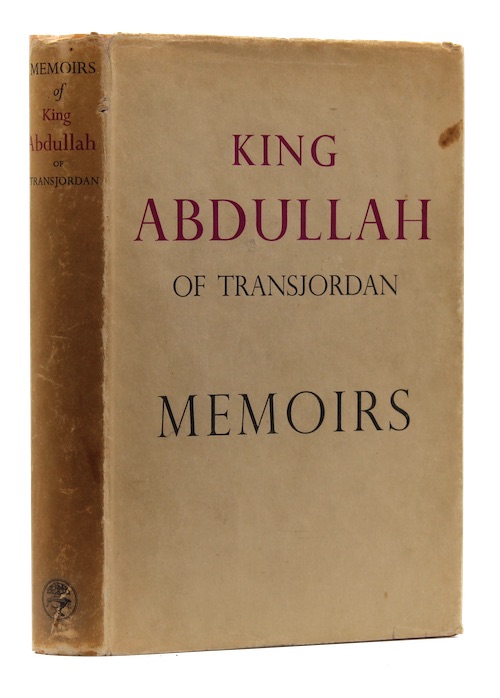 ABDULLAH, King of Jordan. Memoirs of king abdullah of transjordan.

London. Jonathan Cape, 1950. First edition in English.
Call us Email us
8vo. 278pp. With a photographic portrait frontispiece, and a further two plates. Original publisher's red buckram, lettered in gilt, printed paper dustwrapper. Light shelf-wear, some soiling and chipping to dustwrapper, neat paper repair to verso of spine panel at head. Internally clean and crisp. From the library of the late Jeremy Wilson (1944-2017), the authorised biographer of Lawrence, with his distinctive inked ownership inscription to recto of FFEP.
The first edition in English of the memoirs of Abdullah I bin Al-Hussein (1882-1951), the ruler of Jordan and its predecessor state, Transjordan, from 1921 until his assassination in 1951; translated from the Arabic by G. Khuri, edited by Philip P. Graves (1876-1953), with an introduction by R. J. C. Broadhurst (1906-1976).
£ 50.00 Antiquates Ref: 21514
This site uses cookies.Find out more.