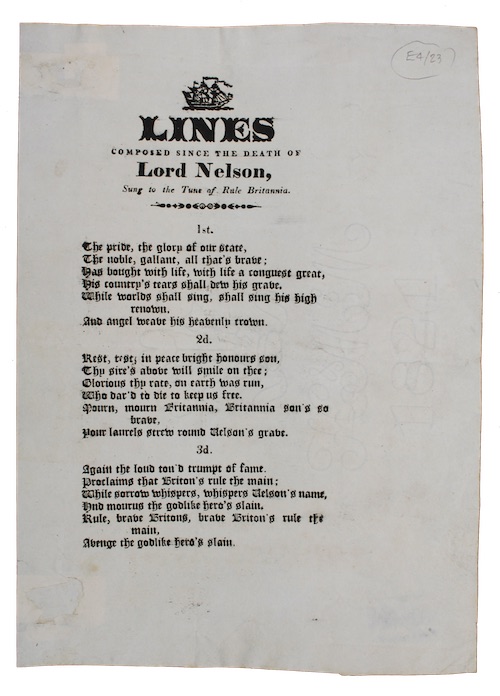 SUNG TO THE TUNE OF RULE BRITANNIA

[NELSON, Admiral Lord]. Lines composed since the death of Lord Nelson, Sung to the Tune of Rule Britannia.

[s.i.]. [s.n., s.d., c.1821]
Call us Email us
Single leaf slip-song, dimensions: 220 x 160mm. Printed, the text in black letter, on paper watermarked 1821 (beneath a fleur-de-lys and the initials FC&McM). Neat repairs to verso, making good margins where evidently removed from an album
An entirely unrecorded printing of three additional verses, celebrations of the naval prowess and ultimate sacrifice of Admiral Lord Nelson 'Who dar'd to die to keep us free', to the popular British national air Rule Britannia, first performed as part of Thomas Arne's Alfred, a Masque first performed at Cliveden in 1740, to celebrate the anniversary of the accession of King George II.

Collections of naval songs and periodicals contemporary to Nelson's death at Trafalgar reveal that the first two these three verses (incipit: 'The pride, the glory of our state' and 'Rest, rest, in peace bright honours son') were composed by Mr Male, and delivered on stage at the Drury Lane Theatre by 'Messrs Dignum and Gibbon'. The third (incipit: 'Again the loud ton'd trumpt of fame') was apparently composed by 'Mr Ashley, of Bath' and performed by the noted tenor Charles Incledon at the Covent Garden Theatre.

We can find no separately printed songster edition of these patriotic verses in COPAC or OCLC.
£ 450.00 Antiquates Ref: 21841
This site uses cookies.Find out more.