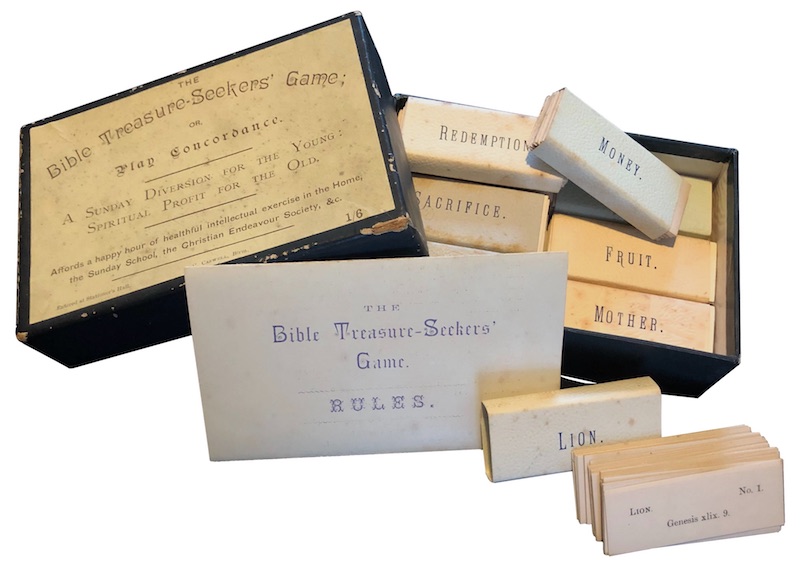 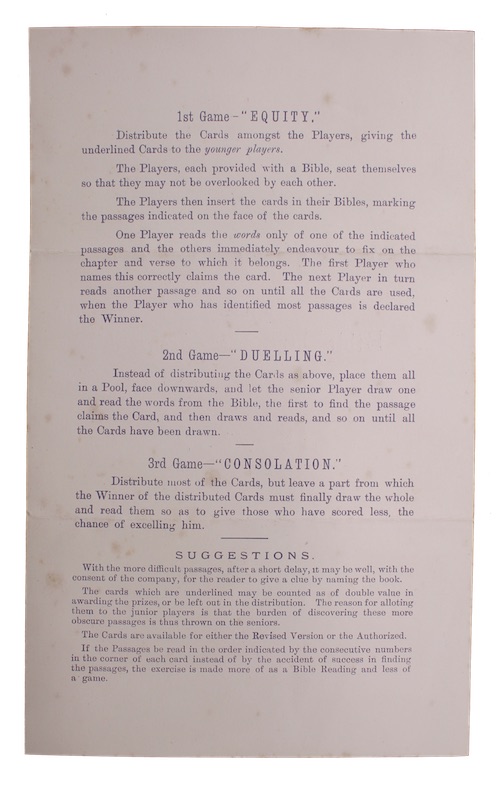 THREE BIBLICAL REFERENCE GAMES IN ONE

[BIBLE - English, Games]. The Bible Treasure-Seekers' Game: or, Play Concordance. A Sunday Diversion for the Young: Spiritual Profit for the Old. Affords a happy hour of healthful intellectual exercise in the Home; the Sunday School, the Christian Endeavour Society, &c.

Birmingham. C. Caswell, [s.d., c.1880?]
Call us Email us
Box dimensions 145 x 95 mm. 12 packs of printed biblical reference cards, grouped thematically and numbered sequentially in the order of the Biblical Books, each contained within a lettered paper wrapper: Sword, Heart, Fruit, Sheep - each with 32 cards; Tree, Mother - each with 28 cards; Grass - with 27 cards (perhaps missing one?); Lion - with 26 cards; Sacrifice, Redemption, Money, Dew - each with 24 cards. With one folded sheet of rules, all contained within the original paper covered box, consisting of two parts, with title label to upper element. Box slightly rubbed at corners, edges, some spotting to card wrappers; else fine.
A remarkable survival, untraced in the usual databases, of an apparently late Victorian card based concordance game (originally priced at 1s 6d) for the Christian Sabbath, the rules of which detail three manners of play. The first, 'Equity', involves distribution of the cards to all players, who then 'insert the cards in their Bibles' and take turns to read 'the words only of one of the indicated passages', with the first player correctly identifying the 'chapter and verse to which it belongs' claiming the card; the player claiming the most cards wins. The second, 'Duelling', is a variation on the first, where instead of 'distributing the cards, as above', the cards are all placed 'in a Pool, face downwards', with the game proceeding from there in the same manner. The final game, charitably termed 'Consolation', leaves a portion of the cards from the original 'Equity' method aside, to be read by the 'Winner of the distributed Cards...so as to give those who have scored less, the chance of excelling him'.

As the terminal 'Suggestions' gravely note, perhaps for the attention of the sterner Sunday School teacher, 'If the Passages be read in the order indicated by the consecutive numbers in the corner of each card...the exercise is made more of a Bible Reading and less of a game'.

Caswell of Birmingham published a wealth of juvenile works during the Victorian era; the vast majority, as here, were Biblical in nature; we could not locate any other examples of Caswell produced games.
£ 540.00 Antiquates Ref: 21901
This site uses cookies.Find out more.