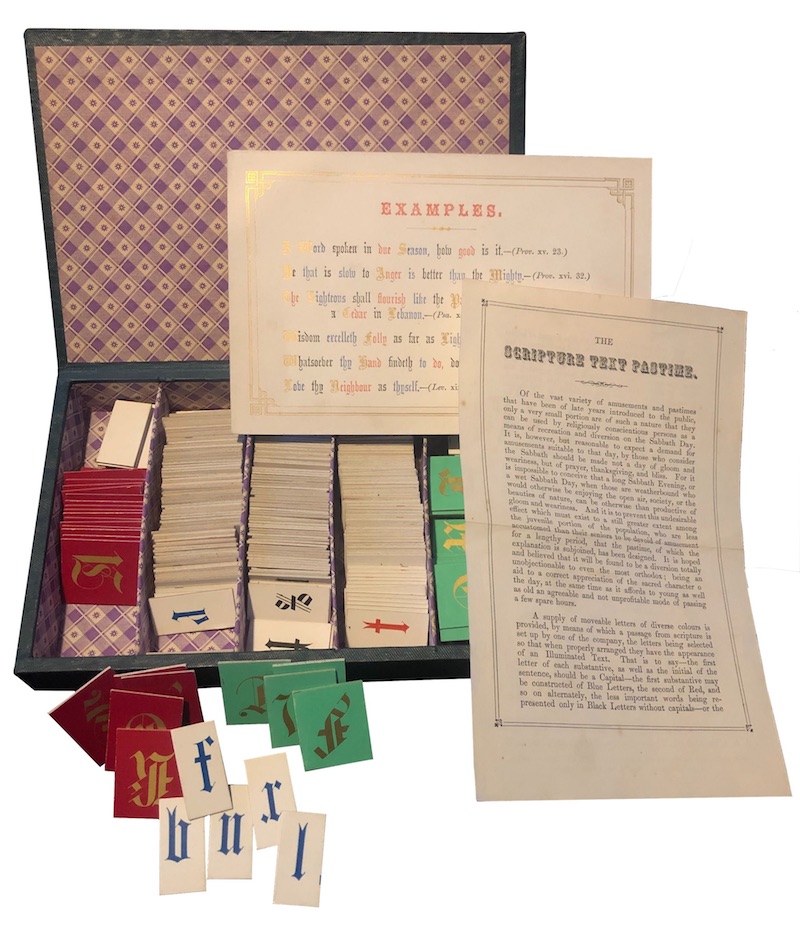 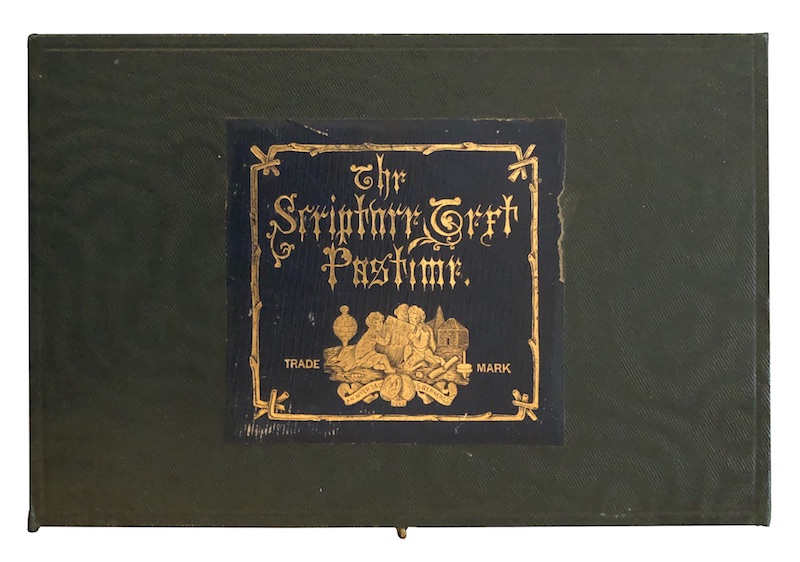 London. A.N. Myers, 15 Berners Street, 1862.
Call us Email us
Box dimensions 205 x 135 mm. Contents, presumably incomplete but not largely so, comprise illuminated capitals, printed on one side in gold on stiff card in red (24) and green (24); lower case letters printed on one side of stiff card, verso blank, in red (72), black (76) and blue (75), and blank word spacers (16). With one folded leaf of rules, printed in black on both sides; one stiff card of illuminated 'Examples'. All contained within a handsome cloth-bound hinged box, with morocco lettering-piece to lid, hook and eye clasp. Slight rubbing, else fine.
A stunning example of a mid-Victorian juvenile diversion for the Christian Sabbath, in a style very much drawing upon the influences of Owen Jones- style textual illumination.

As the detailed explanatory text outlines, 'a supply of moveable letters of diverse colours is provided, by means of which a passage from scripture is set up by one of the company, the letters being selected so that when properly arranged they have the appearance of an Illuminated Text', with emphasised capitals and a hierarchical formula for the colour of individual words from a scriptural excerpt 'so that no two consecutive words have the same colour'. As if the construction was not sufficiently diverting, several forms of game are suggested around the notion of mixing the letters together and challenging others to 'discover the text designated, proceeding only on the data furnished by the letters themselves, namely: - the number of words, denoted by a blank placed between every two words - the number on substantives, indicated by the capitals -the letters from which the principal words are to be formed, denoted by different colours -together with the knowledge that all the letters of each word are of one colour'. The rules also note, perhaps grudgingly, that 'discovery may be facilitated by reference to a concordance when a key-word has been found' and that the letters and rules are similarly applicable ‘to texts from poets and other well-known writers, and can thus be used for other purposes'.

A.N. Myers were a significant publisher of Victorian games and books for children; however, this title, perhaps unsurprisingly given its nature, is unrecorded in the usual databases. Indeed, the only reference to this title that we could find is in Jane Ellice Hopkin's Work among the lost (London, 1870), in an account of the activities of 'inmates' of the Albion Hill Home for Female Penitents, Brighton, which refers to this very game as 'combining amusement with instruction in Scripture and spelling', noting that 'the common alphabet can be readily pencilled at the back' of each letter 'should the Gothic alphabet be too puzzling'.