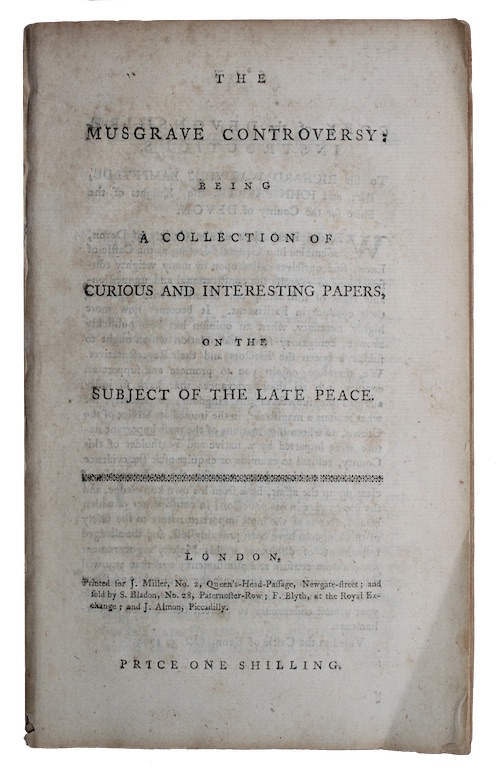 [MUSGRAVE, Samuel]. The musgrave controversy: being a collection of curious and interesting papers, on the subject of the late peace.

London. Printed for J. Miller, [1769]. First edition.
Call us Email us
8vo. 60pp. Disbound. Title page working-loose, lightly spotted.
The first edition of physician Samuel Musgrave's (1732-1780) controversial address 'to the Gentlemen, Clergy, and Freeholders of Devon' regarding his alleged discovery of a piece of political chicanery in which the peace treaty signed in 1762, which had ended the Seven Years' War, had been sold to the French by persons of high rank, including Lord Bute. Musgrave, by his own admission, was unable to prove the charges. Many pamphlets appeared for and against him, however in a House of Commons hearing the accusations were voted to be unworthy of credit. Musgrave maintained that he had acted purely on patriotic grounds, but his reputation was severely damaged.
£ 125.00 Antiquates Ref: 22013
This site uses cookies.Find out more.