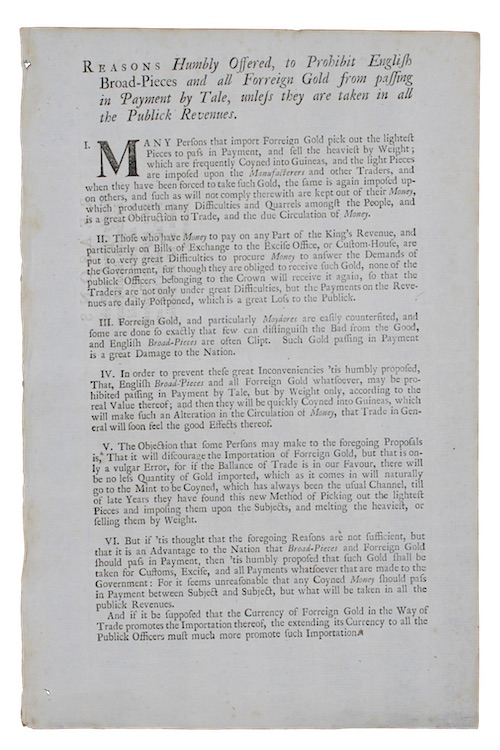 'GREAT DAMAGE TO THE NATION'

[GOLD COINAGE]. [Drop-head title:] Reasons Humbly Offered, to Prohibit English Broad-Pieces and all Forreign Gold from passing in Payment by Tale, unlesss they are taken in all the Publick Revenues.

[s.i., London?]. [s.n.], [1724?].
Call us Email us
Folio. Single leaf broadside, with docket-title printed to verso. Stab-stitch holes to gutter margin, old folds, slightly marked.
An early example of Parliamentary lobbying literature, published in small numbers for distribution to Members of Parliament in order to influence opinion in the run up to debates and divisions. This short document outlines the problems that 'Manufacturers and other Traders' face in accepting gold coinage (either English 'broads' or foreign examples) as means of payment, and moreover proposing that such coin is only accepted by weight, rather than 'by tale', to better avoid the danger of 'easily counterfited' Maydores or 'English Broad-Pieces....often Clipt'. The situation of 'such Gold passing in Payment is a great Damage to the Nation'.

Although undated, this short document appears to relate to a petition on the problems of foreign gold coins presented to the House in March 1723/4.