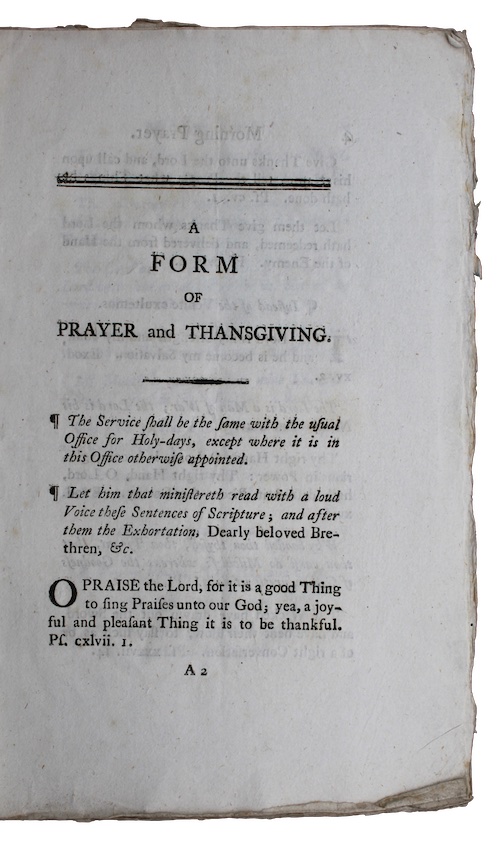 [NELSON]. [BATTLE OF THE NILE]. A form of prayer and thanksgiving to almighty God, to be used In all Churches and Chapels...on Thursday the Twenty-ninth Day of November 1798, being the Day appointed by His Majesty's Royal Proclamation for a General thanksgiving to Almighty God, for the late glorious Victory obtained by His Majesty's Ships of War, under the Command of Lord Nelson of the Nile, over the French Fleet...

[London?]. [s.n.], 1798.
Call us Email us
Quarto. 15pp, [1]. Uncut. Stitched, as issued. A trifle creased, browned, and dust-soiled.
An apparently unrecorded edition, in original state, of a liturgy to be used on the day of national thanksgiving ordered in celebration of the British victory over the French fleet at the Battle of the Nile. Owing to Nelson’s first dispatches being intercepted, confirmation of the British victory in the first days of August 1798 - which represented one of the most significant reversals of fortune in the naval Age of Sail, securing supremacy of the Mediterranean for the Royal Navy - did not reach England until 2nd October. Jubilant celebrations erupted around the country.

The usual databases record numerous variants of the edition published by George Eyre and Andrew Strahan, printers to the King. The present edition, without any information in the imprint besides the date, is seemingly unaccounted for. Intriguingly, those editions that are recorded run to only 11pp.; the present issue however contains a 3pp 'Communion Service' evidently not included in other states - perhaps suggesting an edition printed for the use of a specific, unidentified, parish?