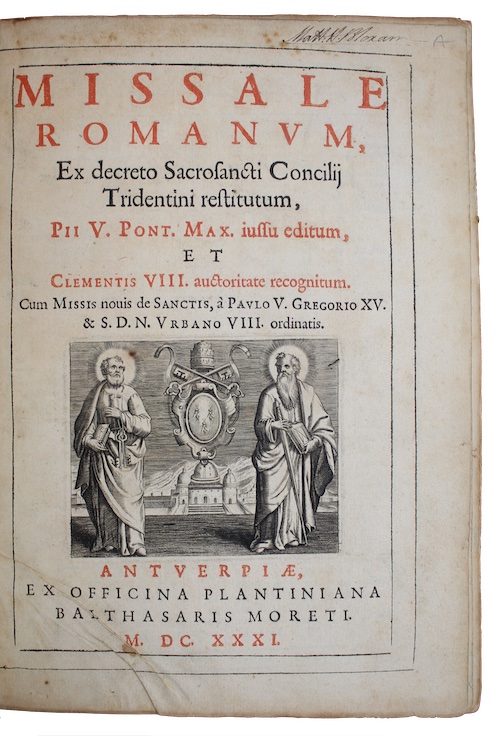 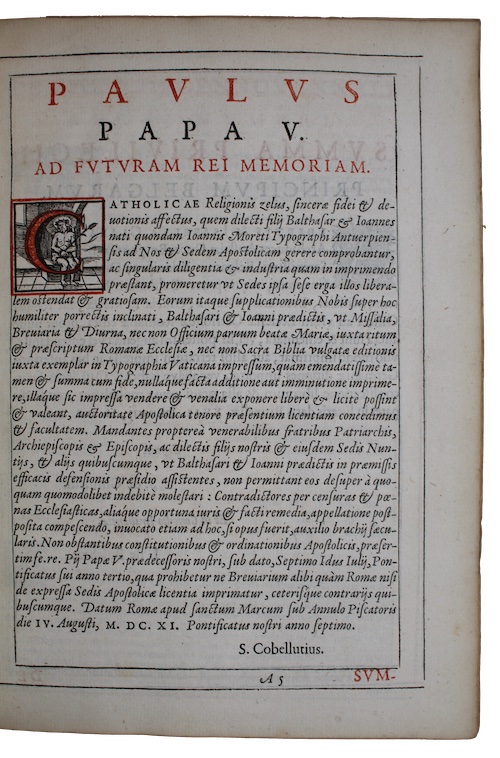 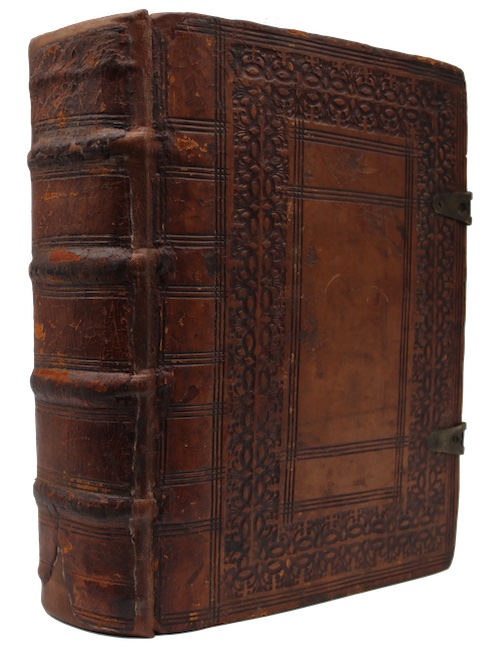 Antuerpiae [i.e. Antwerp]. Ex officina Plantiniana Balthasaris Moreti, 1631.
Call us Email us
[64], 580, cxix, [5]. Printed throughout in red and black. With an engraved vignette to title and nine full-page engraved illustrations in the text. Includes music in Gregorian notation.

Quarto. Contemporary blind-tooled calf over wooden boards, without clasps. Recently expertly rebacked, preserving remnants of contemporary spine panel, spherical page tabs to fore-edge. Extremities worn. Scattered foxing. From the Rugby School library, Bloxam bequest, parts of which were recently dispersed, with two bookplates to FEP, nineteenth-century inked annotation in Bloxam's hand to verso of FFEP, and ownership inscription to title page.
The Roman Missal, with origins in the high middle ages, is the liturgical book from which the text and rubrics for the celebration of Catholic Mass, with both prayers and music. One of the major advances of the Council of Trent, the Catholic counter to the Protestant Reformation, was to standardise the Missal. Pope Pius V, acting on the concilliar deciion, formalised this in his Quo Primum on 14 July 1570 - insisting that the standard form of the Missal was used throughout the Church except where a local missal could be proved to be of two centuries antiquity. Perhaps one of the most controversial Counter-Reformation decisions made at Trent, the use of a standard Missal prevented the celebration of the Mass in vernacular languages and signified a further strengthening of Papal authority: particularly as all printed editions were prefaced by the Pope's order of standardisation. The Missal of Pius V was further edited by Clement VIII in 1604, and later by Urban VIII in 1634.
£ 750.00 Antiquates Ref: 24670
This site uses cookies.Find out more.