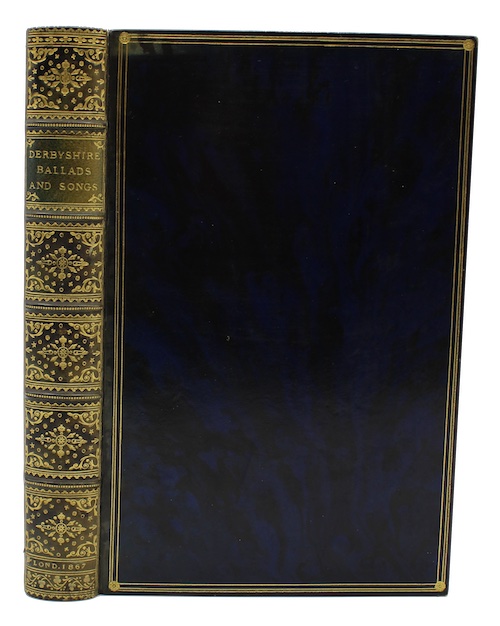 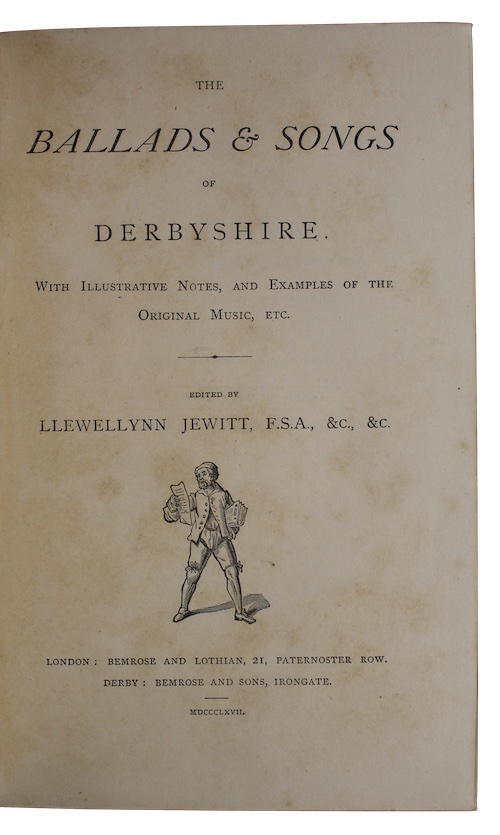 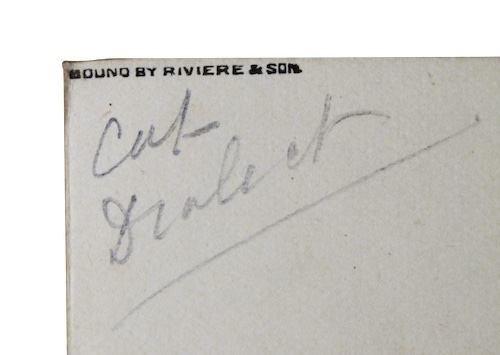 JEWITT, Llewellynn [editor]. The ballads & songs of Derbyshire. With illustrative notes, and examples of the original music, etc..

London. Bemrose and Lothian, 1867.
Call us Email us
8vo. xvi, 307pp, [1]. With an engraved frontispiece. Bound by Riviere & Son in later gilt-tooled navy calf, A.E.G. A trifle rubbed, spine lightly sunned. Marbled endpapers, armorial bookplate of Thomas Gaisford to FEP, scattered foxing.
The sole edition of a compilation of traditional ballads relating to, and originating from, Derbyshire. The editor, antiquary Llewellynn Jewitt (bap. 1816, d. 1886), a long- time resident of the county, moved to Derby in 1853 where he started the Derby Telegraph. He was vice-president of the Derbyshire Archaeological Society, and acted as honorary curator of the town and county museum. In 1860 he established a pioneering local antiquarian quarterly journal, The Reliquary.

Robert Riviere (1808-1882) initially established himself at Bath as a bookseller in 1829, and subsequently turned to bookbinding. Around 1840 he moved to London, where he commenced business solely as a binder, attracting the patronage of a wealthy clientele, including royalty. The output of Riviere, like the majority of binders of this period, is lacking in innovation; contemporary tastes predominantly calling for the production of ‘retrospective’ bindings, frequently in a style not even remotely suitable for the books they contained. However, in all other aspects - from the quality of the materials employed, to the delicacy of the tooling - the bindings of Riviere are richly deserving of admiration; particularly considering that he was apparently entirely self-taught. On his death Riviere bequeathed his business to Percival Calkin, the eldest son of his second daughter, who had been taken into partnership by his grandfather in 1881, when the style of the firm was altered to Riviere & Son. The company continued to operate until 1939. The goodwill and the tools were sold to Messrs Bayntun of Bath.
£ 450.00 Antiquates Ref: 25052
This site uses cookies.Find out more.