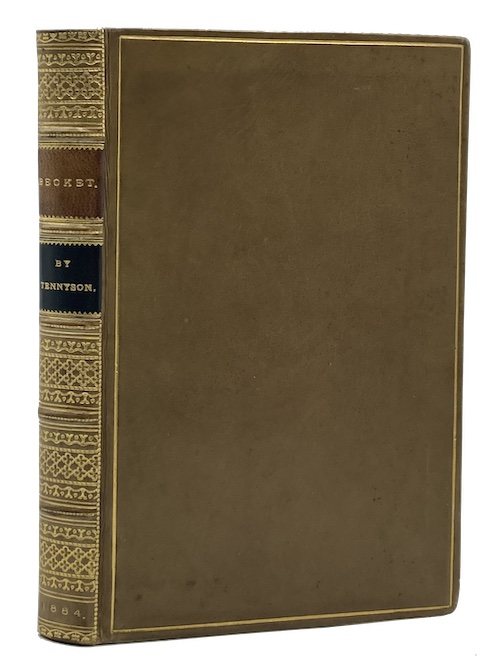 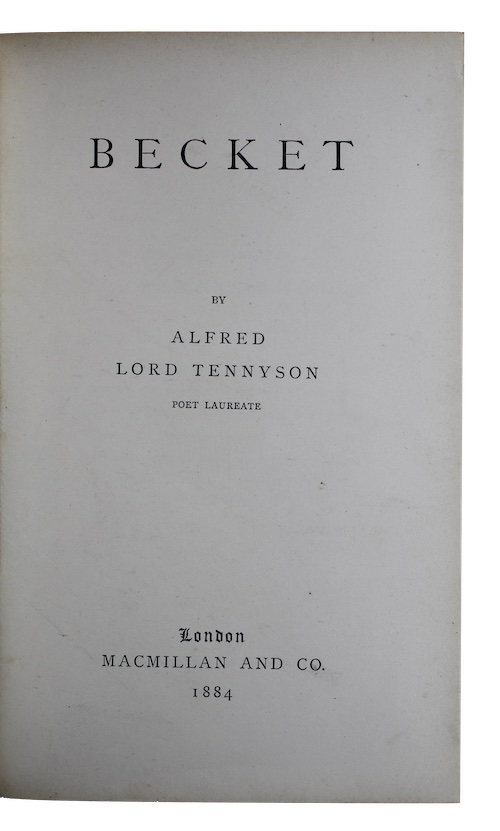 London. Macmillian and Co., 1884. First edition.
Call us Email us
8vo. [8], 213pp, [1]. With a half-title. Bound by Mudie in contemporary gilt-tooled calf, contrasting black and brown morocco lettering-pieces, A.E.G. Minor shelf-wear. Marbled endpapers, recent bookplate of Robert J. Hayhurst to FEP, binder's ink pallet on front free endpaper, internally clean and crisp.
A handsomely bound copy of the first edition of Tennyson's history play, inspired by the murder of Archbishop of Canterbury Thomas Becket. The tragedy debuted at the Lyceum Theatre in February 1893, then under the management of Henry Irving. In 1880, Tennyson wrote regarding the potential of the play and Irving's concerns: 'He said it was magnificent, but it would cost £3000 to mount it, - he couldn't afford the risk. If well put on the stage, it would act for a time, and it would bring me credit - but it wouldn't pay. The success of a piece doesn't depend on its literary merit or even on its stage effect, but on its hitting somehow'.

Charles Edward Mudie (1818-1890), began trading as a newspaper agent, stationer, and lending librarian in 1840. Within two years the book-lending side of his business had become his main concern. The success of his circulating library, which by the mid- century numbered over 25,000 subscribers, played a key role in sustaining the three- volume novel format - the low subscription rates (starting at one guinea a year) and unlimited borrowing allowing less affluent members of the public to read triple-decker works without committing to the comparatively high retail cost. Between 1853 and 1862 Mudie is said to have added approximately 960,000 volumes to his stock, thus becoming one of the primary distributors of literature in Britain.
Ramsden p.108.
£ 150.00 Antiquates Ref: 25811
This site uses cookies.Find out more.