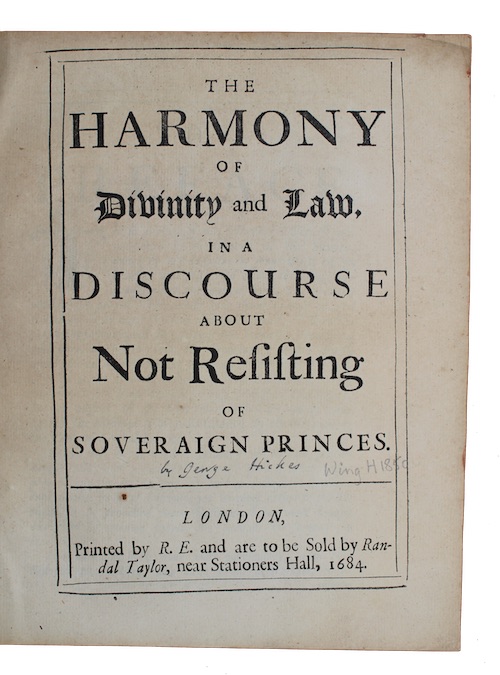 [HICKES, George]. The harmony of Divinity and Law, in a discourse about Not Resisting of soveraign princes. London. Printed by R. E. and are to be Sold by Randal Taylor, 1684. First edition. Quarto. [16], 80pp. With an initial blank leaf. Disbound. Recent book-label of Eric Gerald Stanley to verso of (nearly detached) initial blank leaf, very occasional light spotting. More > £ 125.00 Antiquates Ref. 21588 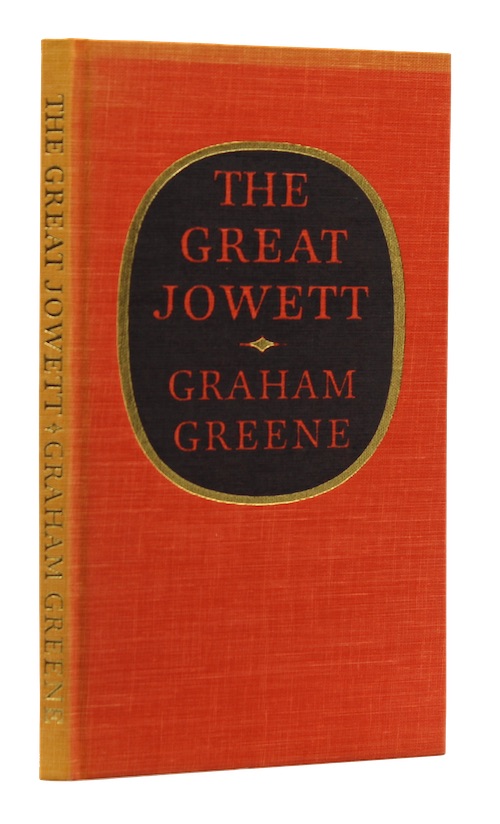 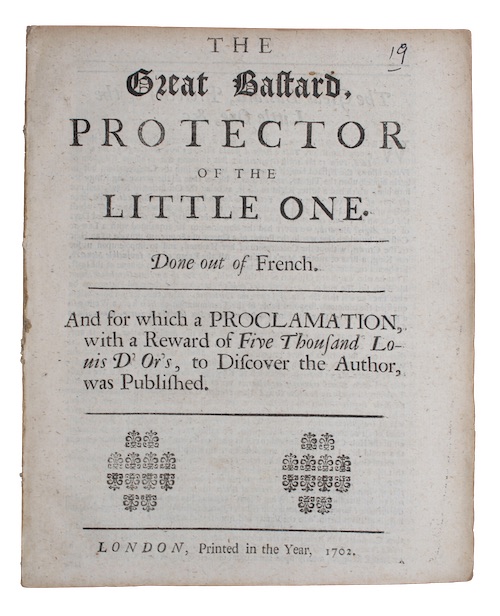 [LOUIS XIV]. The Great Bastard, protector of the little one. Done out of French. And for which a proclamation, with a Reward of Five Thousand Louis D'Ors, to Discover the Author, was Published. London. [s.n.], 1702. Quarto. 8pp. Disbound. Lightly dust-soiled. More > £ 100.00 Antiquates Ref. 21288 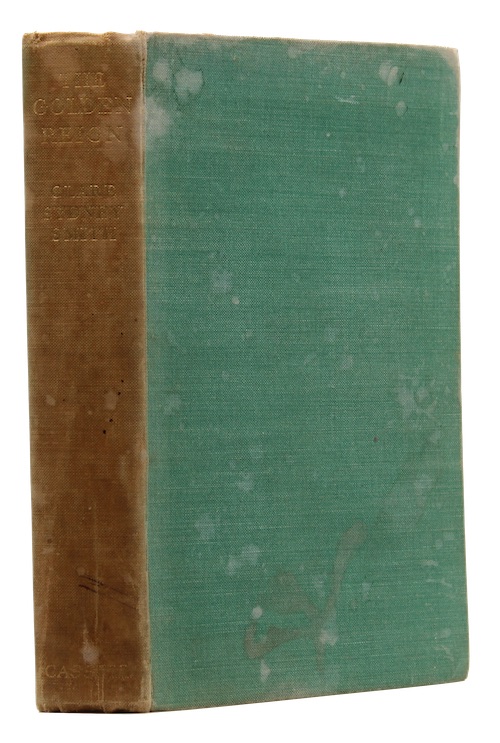 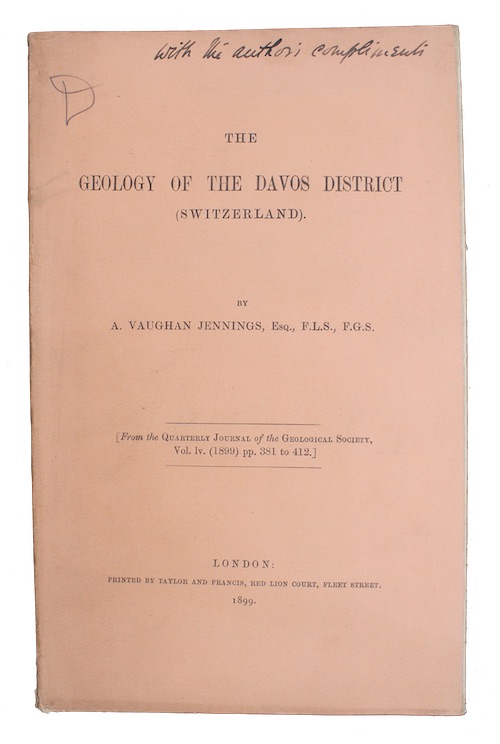 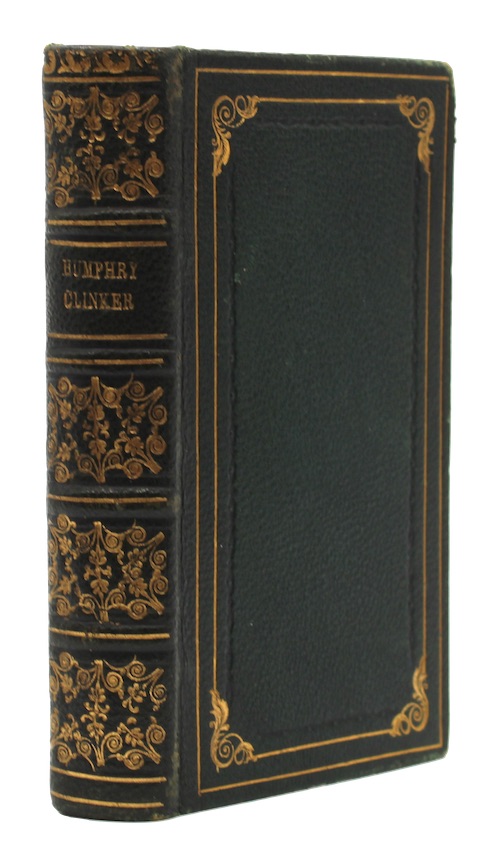 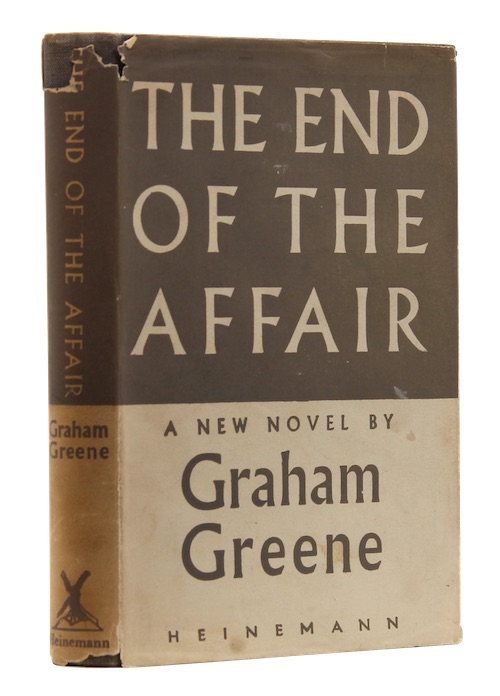 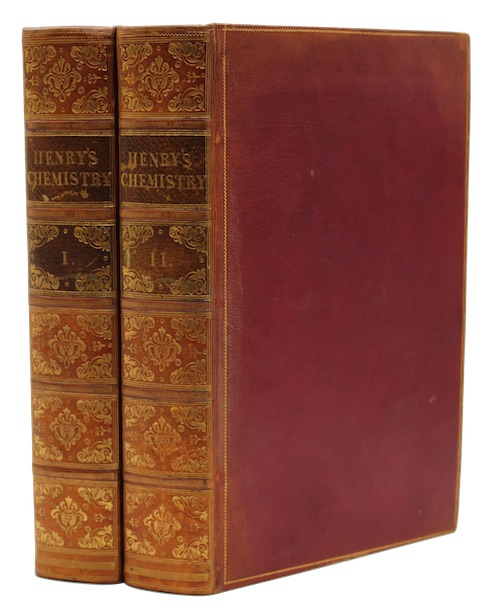 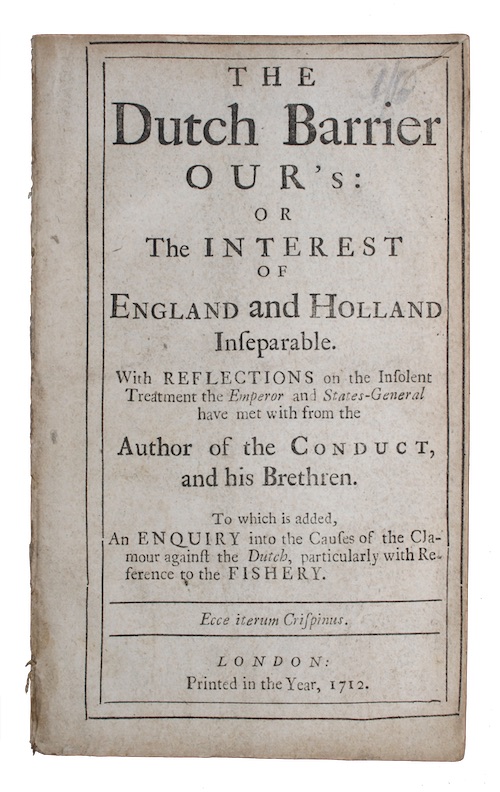 [OLDMIXON, John]. The Dutch Barrier our's: or The interest of England and Holland Inseparable. With reflections on the Insolent Treatment the Emperor and States-General have met with from the Author of the Conduct and his Brethren. To which is added, An enquiry into the Causes of the Clamour against the Dutch, particularly with Reference to the fishery. London. [s.n.], 1712. 8vo. 20pp. Disbound. A trifle dust-soiled. More > £ 75.00 Antiquates Ref. 21285 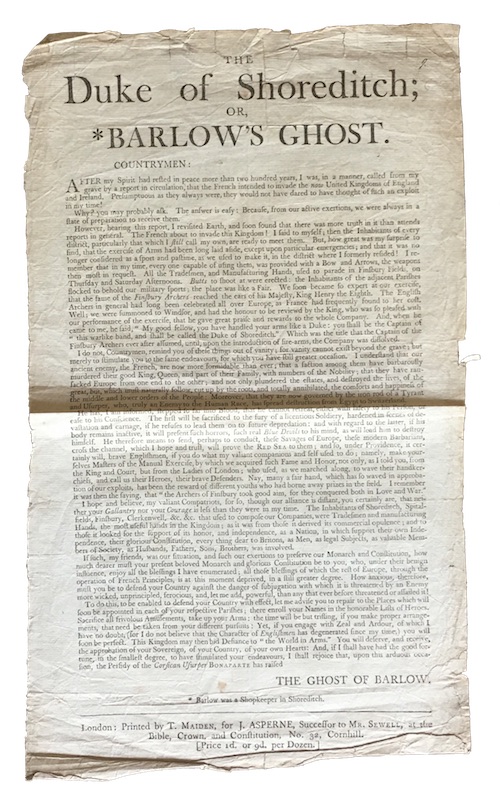 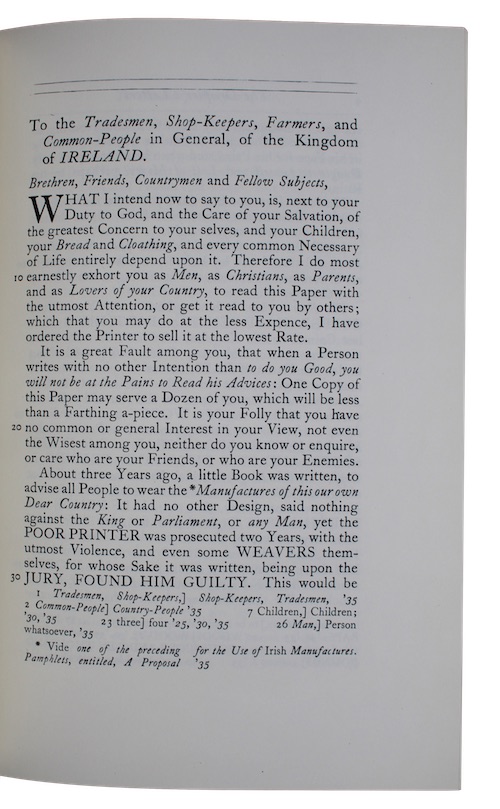 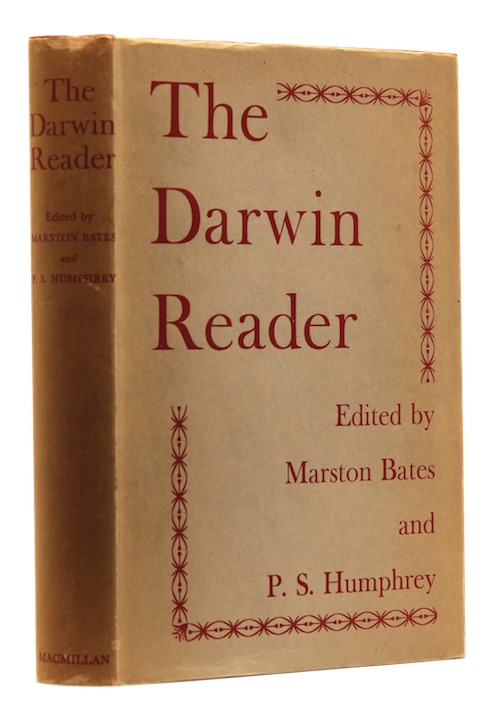 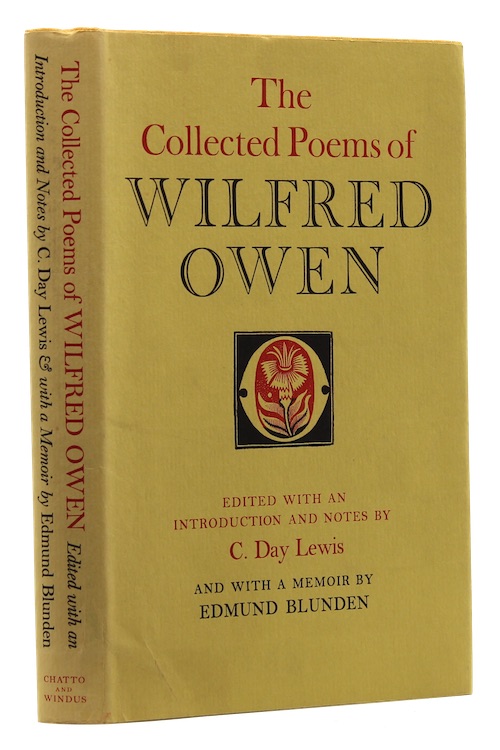 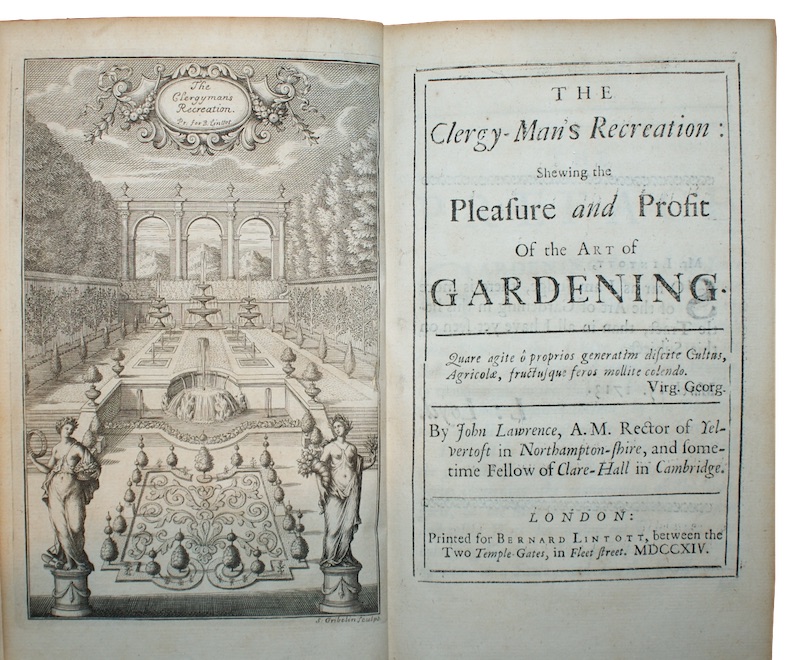 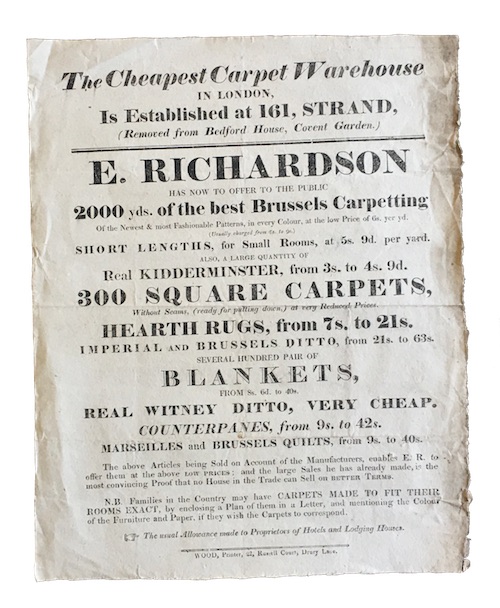 [LONDON TRADE]. The Cheapest Carpet Warehouse in london, Is Established at 161, strand, (Removed from Bedford House, Covent Garden.) E. richardson has now to offer to the public 2000 yds. of the best Brussels Carpetting Of the Newest & most Fashionable Patterns, in every Colour, at the low Price of 6s. yer yd... [London]. Wood, Printer, [s.d., c.1820] Dimensions 230 x 280 mm. Single leaf handbill, printed on one side only. Horizontal folds, lightly creased, one edge soiled. More > £ 250.00 Antiquates Ref. 20723 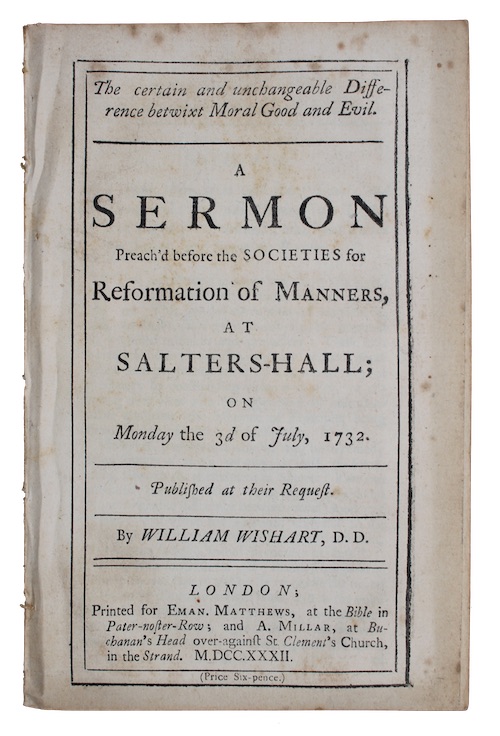 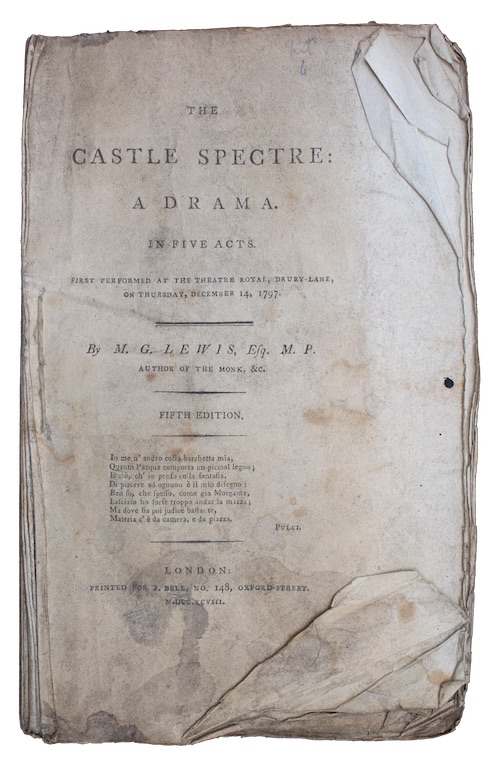 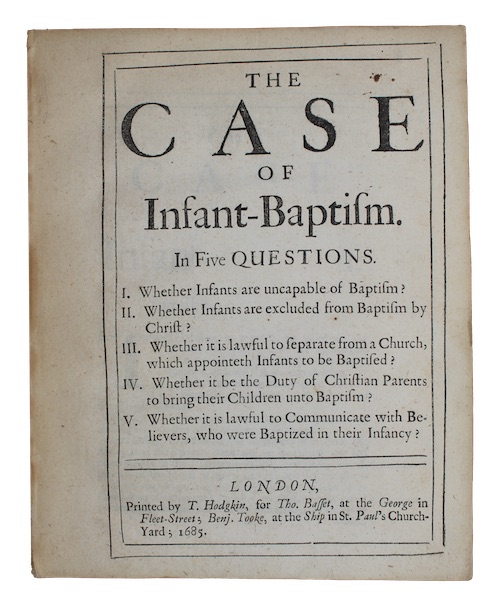 [HICKES, George]. The case of Infant-Baptism. In Five questions. I. Whether Infants are uncapable of Baptism? II. Whether Infants are excluded from Baptism by Christ? III. Whether it is lawful to separate from a Church, which appointeth Infants to be Baptised? IV. Whether it be the Duty of Christian Parents to bring their Children unto Baptism? V. Whether it is lawful to Communicate with Believers, who were Baptized in their Infancy?. London. Printed by T. Hodgkin, for Tho. Basset, 1685. Second edition. Quarto. [2], 94pp. Disbound. Recent book-label of Eric Gerald Stanley to verso of title page, short horizontal tear to leaf F3 (touching text, without loss), very occasional light spotting. More > £ 75.00 Antiquates Ref. 21587 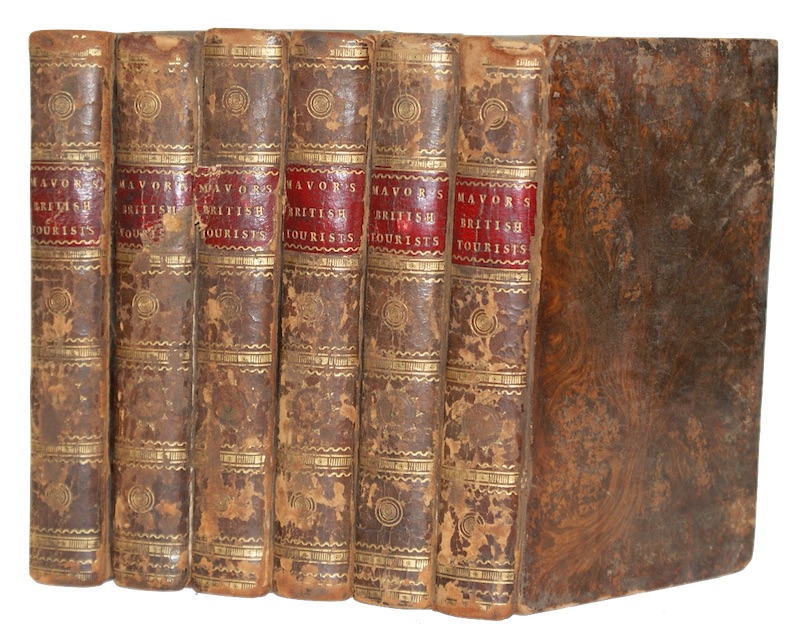 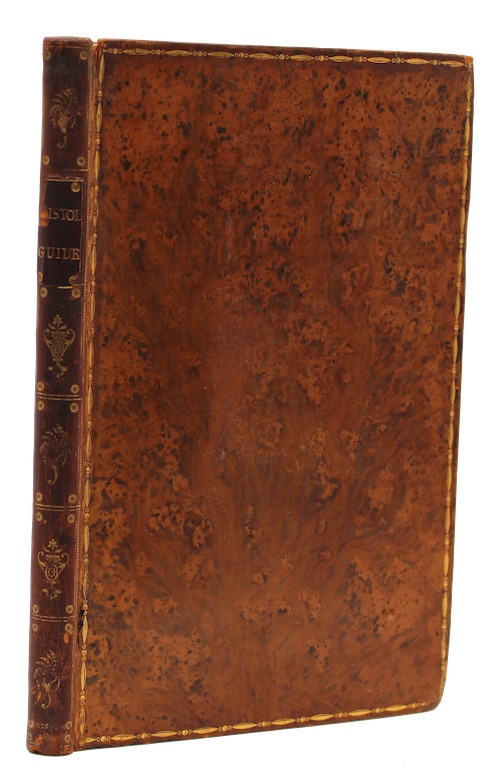